Clash of Generations: Father and Son Drag Each Other In Opposite Dodge Magnums

Ask anyone with a big family, and they will tell you that (almost) nothing beats one-on-one activities. And father/son bonding traditionally happens over things they both love: cars, racing, station wagons. Wait, what?
32 photos

Well, at least that is what probably happened in this family as both father and son arrived fully prepared for some quarter-mile fun in a pair of rare Dodge Magnum grocery getters. Only these feisty station wagons are not your regular mom-mobiles, as easily showcased by the videographer behind the Drag Racing and Car Stuff channel on YouTube, who has prepared these true family treats.

The quick walkarounds put everything into the properly menacing, murdered-out perspective, and we can easily see what the Magnum deal is about. The father sports a ProCharger Superchargers 6.1-liter assembly, red brake calipers for the slotted and cross-drilled rotors (remember this identifier, it is about the only difference – along with the bulging hood – against his son’s roof-railed, matching-black unit), as well as the proper cookie cutter plus race pair tire arrangement.

The son’s Magnum walkaround is a bit shorter as he decided to keep everything black, and the main change compared to his father’s setup is the naturally aspirated 5.7-liter with a cam and bored .20 over. Well, after having seen all this, it is probably time to place all bets and decide who will take the glory: age and experience or the new generation’s impetuousness?

Round one takes place in broad daylight (all skirmishes were filmed at Bradenton Motorsports Park), but the filming angle does not allow the proper identification of father and son rides – from behind, they both look virtually the same. Alas, one of them claimed victory with an 11.55s pass against a 12.48s run. Soon, though, all mysteries were solved as the second and third runs placed dad (with his red-caliper Magnum) in the left lane while his son was always right… though not also victorious! 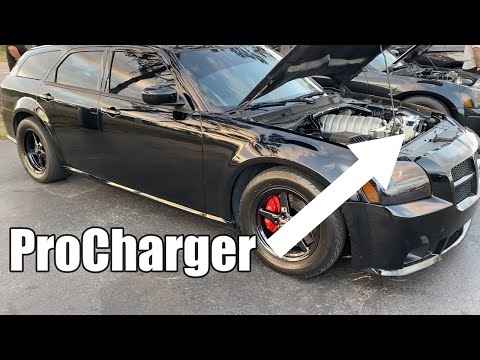