4 Tuned Audi RS 7 Looks Rather Tamed; Come On, Mansory, You Can Do Better!

Dodge Magnum Is Reborn Virtually as a Modern Battery-Electric SUV

Home > News > VIP
Monica Coman
YouTuber CJ on 32s has been constantly fitting his cars with aftermarket wheels from Forgiato, but now he seems to switch it up to Corleone Forged for his new Audi RS 7.
7 photos

Vlogger CJ has quite an impressive car collection and he has promised that it will grow in 2023, too. And he stayed true to his word. The new year barely started before he added a new one, an Audi RS 7. He took delivery of it on January 9, showing it off on social media and in a lengthy YouTube vlog.

The sports car came with a black-on-black color scheme and 22-inch wheels, but, in his regular fashion, he quickly took it to Omar’s Wheels to fit it with aftermarket wheels from Forgiato. He didn't choose black wheels as the RS 7 originally had, going for silver ones instead, obviously of 32 inches. The model seems to be the Fratello-ECL from the Forgiato Original Series.

But it looks like he decided that he wanted something different and, on January 24, he announced that the sports car now rides on different aftermarket wheels. And no, they’re not from Forgiato, but from Corleone Forged.

The new ones are no longer silver, but he eventually went for black and red ones with red brake calipers. According to the brand, the RS 7 is now rolling on 24-inch Dragna wheels.

And the Audi RS 7 is not the first vehicle he has riding on Corleone Forged. His Cadillac CT5 Blackwing and his 2019 Chevrolet Camaro ZL1 also wear the same aftermarket brand. Plus, CJ also hinted that the collab will continue in the near future. The vlogger also claimed that this is the "first-ever Audi R7S on these custom Corleone Forged wheels."

Fun fact, the wheel manufacturer is one of rapper Rick Ross’ favorite aftermarket wheel brands, and he even designed a collection with them.

Prior to buying the Audi, CJ had welcomed yet another German car, a BMW 7 Series that he fitted with the "biggest" Forgiato wheels he could find. But he has big plans for that one, too, and will soon sport new Corleone Forged wheels. 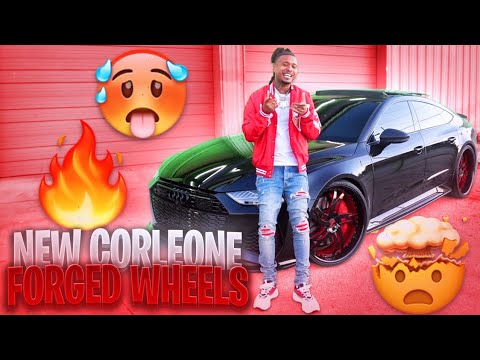 Editor's note: Gallery includes pictures of all the wheels CJ's Audi RS7 has had so far