1 Blinxi, the Helmet Light With Indicators, Is Here to Keep You Safe in Traffic

2 The Delfast Top 3.0 Is Here to Put All Other e-Bikes to Shame

5 Juiced Bikes’ HyperScorpion Is an e-Bike With Quite a Bite
Car video reviews:
Coverstory

What’s comfortable like a scooter, can carry both cargo and passengers, looks like a regular bicycle, but is fast and powerful like an electric one? That would be Model 1 from Civilized Cycles.

It’s OK if the name doesn’t ring a bell because Model 1 hasn’t been launched yet. Furthermore, it’s the first electric bike ever from the New York-based startup Civilized Cycles. But if CEO and founder Zachary Schieffelin has his way, Model 1 will forever change the way we look at city bikes.

Schieffelin used to work at Vespa New York and, when electric bikes began popping up on the market and they included some in their offer, he noticed that people would ask for an ideal product that combined features from various vehicles: they wanted a bicycle but one they didn’t have to pedal all that much; they wanted to ride with someone else, but not on a motorcycle; they wanted cargo space, but didn’t care to invest in a car and scooters were deemed too much of a hassle.

He came up with an idea for what would, years later, become Model 1: an electric bike that was suitable both for passengers and cargo, that was sleek and elegant for the city, and powerful enough to fly over inclines. In 2016, he founded Civilized Cycles, and Model 1 is now taking pre-orders, with a delivery date estimated for August 2020.

Between then, when Schieffelin founded the start-up, and now, the offer of electric bikes has diversified manifold. Today, we have city bikes and all-terrain bikes, bikes for riders with kids and cargo bikes, smart bikes and not so smart ones, ultra-fast and ultra-light bikes and heavy-duty bikes made to take a beating. Model 1 somehow manages to be a blend of all these, a first on the market: a bike that looks like a Dutch cruiser, electric but not immediately apparent, elegant, versatile and very practical.

Model 1 brings a series of features no other e-bike maker has implemented so far. The most obvious one is the pair of integrated panniers made of carbon shells. They serve to carry cargo or personal belongings (with a 20-liter capacity when closed and 80 liters when expanded, so more than suitable for grocery runs), and they also serve as protection for the passenger in the back.

Indeed, Model 1 is made to be enjoyed with company. There is a plush, sizable extra seat in the back, which allows this e-bike to carry two adults or one adult and two kids, with a total payload of 400 pounds (180 kg). Footpegs are available for maximum comfort and, as noted above, the panniers serve as mudguard.

Another solid feature is automatic full suspension, which allows the rider to adapt suspension depending on the weight on the bike, at the touch of a button. This ensures a smooth, comfortable ride regardless if you’re on your own or with someone else or hauling cargo. Hydraulic Tektro brakes front and rear give this bike the needed stopping power in any of these situations.

Unlike in other electric bikes, you can’t see the battery on this one. This too, has been done on purpose: Schieffelin wanted a sleek, elegant step-through, and the only way he could achieve that, considering he’d already added volume to the rear wheel, was to hide the battery. It’s in one of the panniers, and you have the possibility to add another for double the range.

It’s true, the battery takes up space in the pannier, but not much. Civilized Cycles says only 4 liters of those 80 of volume are occupied by the battery. On the plus side, you also get two charging ports, so you can power up your other gadgets on the go, while they’re tucked away neatly inside.

With a frame of hydroformed aluminum, Model 1 weighs 75 pounds (34 kg), which is not light – but it’s definitely not the heaviest e-bike out there, either. Range is estimated at 25 miles (40 km) and can be doubled with an extra battery, and there are two modes available: throttle-only and pedal-assist.

Civilized Cycles offers a 10-year warranty on Model 1 for orders going outside NYC, and 3 years of routine service, 2 years of hardware and software upgrades, 1 year of NYC area roadside assistance. Expected to ship in August, Model 1 is priced $4,999 with a refundable $100 deposit, or $3,999 if you pay in full upfront. 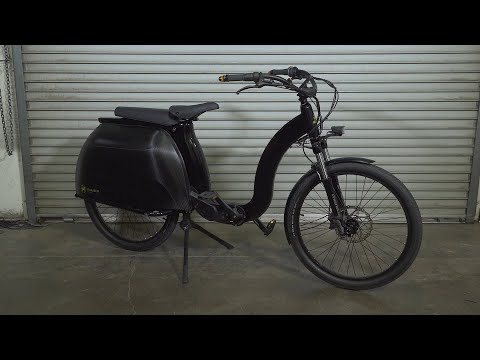