3 Will the 2021 Honda Accord's Barely Updated Interior Turn-Off Some Buyers?

Mihnea Radu
VTEC Turbo engines undoubtedly have their flaws. However, they've made Hondas much faster, even the boring ones. The Accord 2.0T has been a drag racing hero for over a year, winning against cars that look quicker on paper. But can it compete with the Civic Type R?
10 photos

The Type R is a benchmark for hot hatch handling, its main flaws being the looks and the struggle for traction. The 306-horsepower turbo motor can overwhelm even the widest of sticky front tires, but it's not like the Accord is an AWD launching monster.

Despite that, we wouldn't have been surprised if the Accord 2.0T had been the winner of the following drag race. It had done pretty well in the hands of Throttle House. But YouTube vlogger Sam CarLegion did the unthinkable and brought a manual Accord.

What is a manual gearbox midsize sedan? Where do you even get such a thing? It's not available on the U.S. market website, and that's because Honda stopped offering it last July. However, production ended way back in December 2019.

The automaker said only about 2% of total sales were manual, which means about 5,000 of them were made for America in 2019. This race is in Canada, but still, you get the picture. The stick shift was offered with both Accord engines only in the Sport trim, which also adds 19-inch wheels.

Speaking of the wheels, the ones on this sedan are not stock, hinting that it's been tuned. The 2.0T went from its usual 252 horsepower to about 290 hp. But that's still short of the Civic Type R's output.

So, in this case, the Type R does what a sports car is supposed to and wins, with a convincing lead, we might add. However, at the end of the video, they line up a 10-speed Accord with a stock engine, and that puts up an amazing fight.

You can almost tell how Sam has a harder time concentrating on the perfect shifts, knowing how the Honda automatic is relentlessly chasing. We don't blame him; driving a manual is harder, and you have to wonder why the Type R doesn't borrow Acura's fast gearboxes. 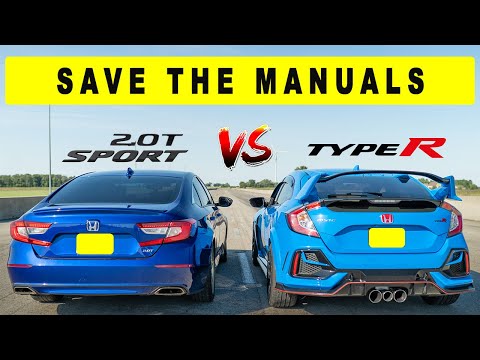