3 How to Drift - First Lesson: Overpowering

From C1 to C6 and from DS3 to DS5, all Citroens are advertised with the “Creative Technologie” tagline. Nowadays it always seems this French company is making cars that are simply rivaling what the Germans are doing, but if we look across almost a century of history, we find they really did invent something amazing, something they hoped would be revolutionary.
1 photo
In 1952, Citroen forever changed car suspension technology, introducing their first vehicle with hydropneumatic, suspension, the Taction Avant 15CV H. Normally, cars rely on springs, or at that time leaf springs, to act as shock absorbers, protecting the passengers from the jolts the car experiences at imperfection of the road. Yet here was a system that claimed to do away with that and also offer dynamism and superior ride quality. To put it simply, the spring and shock absorber were replaced by a sphere, which was filled with trapped gas on one side and and incompressible hydraulic fluid that was connected to the suspension on the other. The system has earned a reputation of high complexity and unreliability, but actually works based on a physics principle that everybody knows, that which tells us that gas is compressible and fluid basically isn’t. Thus, the compression of the gas acts like a spring, while the hydraulic fluid acts like a damper. Citroen also cleverly used a pump to make the car self-leveling, while offering variable ride height, assisted jacking (changing the tire) and zero roll by simply pushing more hydraulic fluid into the suspension at a specific corner of the car.

In the Traction Avant, the system first dreamed up by Citroen employee Paul Mages during World War II was only used by the rear suspension. But the design showed true potential, and it was soon launched onto a mass production car, one we know today as a design icon. In 1955, Citroen launched the DS (the DS19). It was advertised as a rocketship, and they really did go all-out. 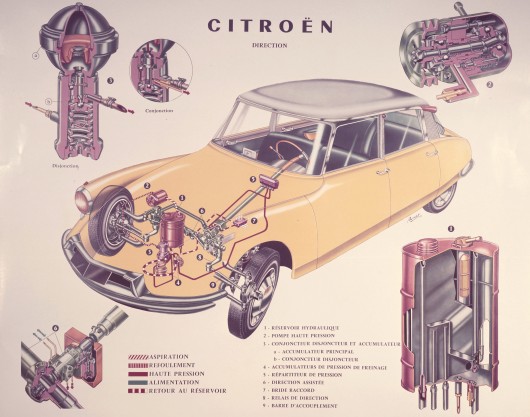 On the Citroen DS, a belt-driven, 7-piston hydraulic pump was driven by the engine and provided pressure for the specially developed LHS hydraulic fluid that not only motivated the suspension, but also the power steering, the brakes and the gearbox and clutch assembly. The DS was also advertised as being capable of having a ride hight of anywhere between 9 and 28 cm.

But how did they do this? Every wheel was attached to a control arm. The movement of the swingarm pushes the hydraulic fluid which in term compresses gas within a sphere. The two are separated from one another by a flexible membrane. The major advantage of this system is that the nitrogen gas has non-linear force-deflection characteristics. To put is simply, if a normal suspension had only springs, it would bounce around for a long time after every bump. That’s what the dampers on our cars are there for, but Citroen’s system does away with this need.

Cars equipped with the hydropneumatic suspension system have five or six spheres, one for each corner, a main accumulator and sometimes another sphere for the braking system, which needs to be independent for safety’s sake. However, up to nine of ten cylinder can be used. For example, the Citroen Xanta from the ‘90s had an extra sphere for each axle for 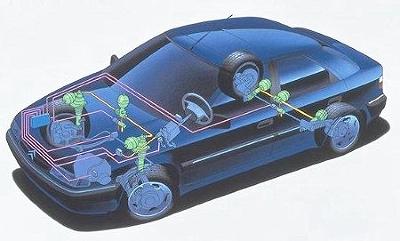 each axle which could be switched into or out of the system to make the damping harder or softer. The Xanta uses MacPherson struts at the front and trailing arms at the back, showing the hydropneumatic suspension could adapt to modern setups.

While cornering, cars also have a tendency to lean on one corner. This makes driving a bit uncomfortable, buy the hydropneumatic suspension system can actually keep everything on the straight and level as well. It pumps the hydraulic liquid under pressure to whichever corner is being pressed down, filling the reservoir and lifting the suspension back up. These corrections are controlled by valves on older cars and electronic sensors on modern ones. The adjustments are made at a delay in order not to correct the regular suspension travel.

On the so-called elk test, a simple slalom to you and me, the system provides just the right body control, while cars with simple steel springs sometimes violently swing and crash, leaning in too hard.

Once the extra fluid is not needed (when the car is unloaded, the driver wants it lowered, or the Citroen isn’t cornering) it is returned to the reservoir via lower pressure return lines.

The system, innovative as it might have been, gained a reputation for unreliability because it was actually released before it was really ready. The LHS hydraulic fluid used by the system had a tendency to absorb water, which in turn resulted in corrosion. The problem was intensified by the fact that the reservoir had to be vented to allow the fluid level to change when it was pumped around.

Citroen solves this problem with a mineral oil called the LHM in 1967 for the DS. This meant the pipes would not corrode and to keep dust in the air from destroying the system over time they introduced a filter and you also had to change the oil and regular intervals. Only specialist mechanics did this, and Citroen thus became known as a somewhat “special” car brand, basically because you could’t service it everywhere.

But Citroen stuck with this system and evolved it over time. In 2001, Hydractive 3 was launched with the Citroen C5. This eliminated the need for a central pressure generator. They introduced electric height adjustment sensors and combined pump and sphere units. The new LDS hydraulic fluid is also much better than before, requiring rarer servicing.

Despite its faults, the system was packed with advantages which attracted other automakers. Rolls Royce licensed the system from Citroen in 1965. Mercedes Benz tried its hand with air suspension, which used air pumps to increase the stiffness of the suspension, but in 1974 it introduced the 450SEL 6.9 with hydropneumatic suspension. Peugeot also used the system on the 405 in 1990.

It might have its faults, and some people say it makes them sick, but it’s the single biggest effort in suspension design. It was, for the guys at Citroen, like going forwards on a magic carpet of hydraulic fluid. “Creative Technologie” indeed!