The anticipated hot version of the first car in the Citroen’s premium DS line-up, the DS3 Racing, has been revealed ahead of its Geneva debut.The newest contender in the hot hatch arena promises to offer an authentic racing feel in terms of both technical and visual features.

The DS3 R is powered by the turbocharged 1.6 liter THP engine developed by PSA Peugeot Citroen in collaboration with BMW which can also be found on the MINI Cooper S. On the french mad hatch, the units develops 200 HP and a healthy 275 Nm of torque, available from 2500 rpm up to 4000 rpm. These figures have been obtained through a series of modifications to the engine’s original components which include a 30 percent additional boost from the turbo, a improved exhaust system architecture and a ECU remap.

As handling sits at the heart of a hot hatch, the R’s chassis has been tweaked by Citroen’s racing specialists. The car has been lowered by 15 mm, while the front and the rear track are 30 mm wider compared to the standard DS3. In addition to that, the car’s suspension has now been stiffened and its steering now offers more feel. The braking hasn’t been neglected either, as the DS3 R uses 4-piston calipers for the front axle. For the rear axle, the car uses drilled brake discs. The 3948 mm long, 1737 mm wide & 1451 mm tall DS3 R rides on 18-inch wheels, wrapped in 205 / 40 sport tires. The car’s ESP system has been re-calibrated in order to cope with the changes and it has also become less intrusive allowing the driver to explore the limits of the car. 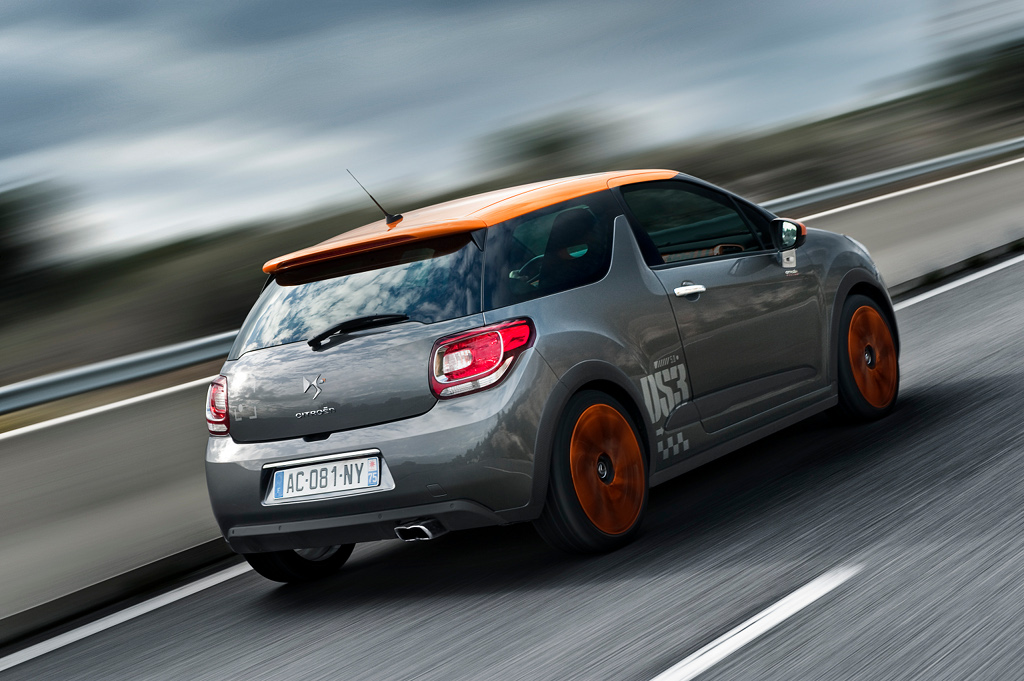 The car’s exterior has a carbon fiber aura, present on the lower part of the front bumper, wheel arches and side guards. At the rear, the hot hatch receives a special diffuser accommodating a chromed exhaust tip. The DS3 R comes in a bespoke livery: its body is dressed in dark gray contrasting with the orange grille contour, wheels, door mirrors and roof. The latter has received special attention as it features a Grey-Orange racing flag theme. The car also wears bespoke decals on the sides and bares a distinct signature logo on the back.

The car treats its passenger with carbon fiber finish for the top of the dashboard, the center console, door armrests and the steering wheel. To create a contrasting image, an orange finish has been used for the dashboard, bottom faceplate of the sifter and also for the latter’s knob. A special number plate will remind each of the users that they own a limited edition vehicle. The front passengers will be accommodated by new Alcantara-leather sport seats, that feature orange stitching.

The DS3 Racing will enter the market in the second half of the current year, as a 1000 units limited-edition.