3 This Porsche Carrera GT Has Been Driven 67,121 Miles, It’s Also For Sale

There are supercars, then there are super supercars. Entering the Koenigsegg club is an extremely different affair from buying a Ferrari, and there are many reasons the most well-to-do are much obliged to wait years for the delivery of their Scandinavian land missile.
9 photos

The Jesko is Christian’s latest design, unveiled earlier this year at the Geneva Motor Show to a cheering crowd. Named after the father of Christian von Koenigsegg, the twin-turbo V8 blunderbuss doesn’t care about the electric revolution and saving the planet. Its character is a combination of get-up-and-go with extreme aerodynamic trickery and sharp handling, which sounds very tempting to the most driving-centric of customers.

Ahead of its planned start of production in 2020, the Jesko has been demonstrated as a pre-production prototype at the company’s Ängelholm headquarters in Sweden. None other than Christian was driving the car, and at one moment, he told LAOC Exotics to get behind the Jesko in order to film the flames shooting through the exhaust.

From an aural standpoint, the idling, revving, and flybys all send a shiver down your spine. The engine is an evolution of the 5.0-liter in the Agera, a twin-turbo V8 that develops close to 1,300 horsepower on gasoline. Opt for a blend of 85-percent ethanol, and you’re looking at 1,625 PS (1,603 horsepower) at the crankshaft of the Swedish interloper.

A nine-speed MCT does the shifting as quickly as possible, weighing 90 kilograms and featuring 21 possible gear combinations. The carbon-fiber aircore wheels have also been designed to weigh as little as possible, tipping the scales at 5.9 kilograms (13 pounds ) and 7.7 kilograms (17 pounds).

As unapologetic as it may be about performance and handling, the Jesko doesn’t compromise on comfort either. The dihedral synchro-helix doors utilize Autoskin technology for easier operation, the roof can be removed for wind-in-your-hand driving, the cabin has USB ports and Bluetooth connectivity, and there’s even a 9.0-inch touchscreen infotainment.

Not long, a low-drag version of the Jesko will be introduced with a top speed in excess of 300 miles per hour (483 km/h). 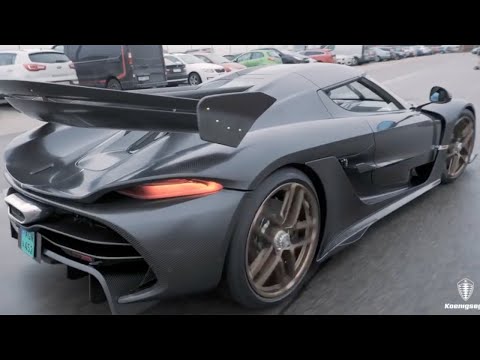