2 TopGear Teases Speedweek 2021: An Insane Salute To All Things Fast

3 Chris Harris Tries Out the Lamborghini Sian, Is He Impressed?

There are many definitions for what makes the sport utility vehicle a sport utility vehicle, but more importantly, SUVs used to be niche automobiles for a long time. These high-riding machines became a little more popular in the late '60s and early '80s, but nobody could’ve guessed they would replace traditional automobiles in the United States in the '10s and '20s.
11 photos

The Ford Motor Company is the perfect example in this regard, choosing to eliminate its hatchbacks and sedans in favor of an SUV-only lineup with the notable exception of the Mustang. General Motors and Fiat Chrysler also prefer utility vehicles over hatchbacks and sedans, and it’s not the automotive industry fault for this paradigm shift. Had there not been sufficient demand for this kind of vehicle, SUVs would’ve been niche even in 2022.

But with the switch to utility vehicles, many automakers have also watered down their image. The Land Rover Defender comes to mind, now a unibody luxobarge instead of a body-on-frame overlander. Chris Harris actually likes the all-new Defender, but “if you put knobbly tires and just drive it around Wandsworth, I’m still not impressed. I still think you’re a knob.”

The British automotive journalist and Top Gear host is famous for describing the prospective customer pool for the upcoming Ferrari Purosangue as wealthy tasteless persons. Although pre-production test mules corner as flat as SUVs can at the Fiorano circuit in Italy, there’s no denying the Purosangue doesn’t have the same tastefulness as a 2+2 GT.

But the Maranello-based automaker shouldn’t be blamed for it. Just like before, customer demand has forced the Prancing Horse to pour millions of euros in the Purosangue in order to fend off the Lamborghini Urus, Bentley Bentayga, and countless other super-sport or ultra-luxury utility vehicles.

In the video below, the one and only Chris Harris also makes a good point regarding the BMW X6 that singlehandedly started the coupe-SUV trend. He also compares the Rolls-Royce Cullinan to a Chinese knockoff, and Harris also loathes electric off-road vehicles. Referring to the likes of the GMC Hummer EV and Ford F-150 Lightning, the man highlights that “they’re too big and too heavy and have too much friction in their tires.”

On the upside, Wrangler and Bronco customers need not worry because genuine off-roaders are much to the liking of the guy who was banned from driving Ferraris after he shed light on the automaker’s dubious practices. 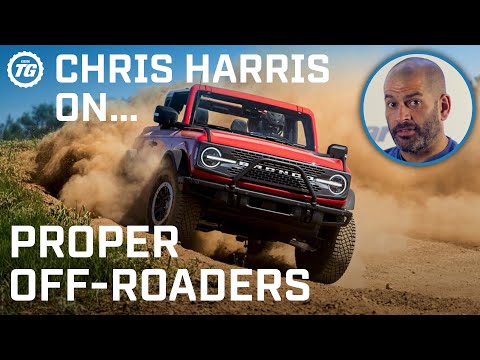