Chris Harris Drives the Porsche 992 GT3, and Then He Drives It Some More

As a car journalist, especially an experienced one working for an important title, getting genuinely excited about driving a new car happens less and less often.
9 photos

Sure, you have your occasional hypercar and your annual Ferrari—those will always be an occasion—but other than that, even something like a BMW M car is starting to lose its appeal. Add the fact more and more new models have electric powertrains, and you can understand why an old-school journalist might feel a bit jaded with his day-to-day work.

The Porsche 911 is basically the symbol for cars that don't really change from generation to generation, so the release of a new model should theoretically fall into the "boring" basket, but we all know that's not the case. There are two reasons for that: one, while the exterior is indeed very similar from one iteration to another, the German engineers still find ways to make the 911 better and better, and second, it's a 911, the car that is so closely tied to the last decades of the automotive history it would be hard to even imagine one without it.

Plus, this isn't just any 911, but the GT3 (Clubsport), which is probably the best way one could summarize the essence of this legendary model: great, no-compromise handling, immense grip, plenty of power, and that all-important naturally aspirated flat-six. Oh, and it also comes as a manual, though Chris wasn't that lucky and got a PDK version instead.

We went through all this in an attempt to explain why Chris Harris, the man who has worked for British car magazines, had a successful YouTube channel, and now works for Top Gear, decided he would break in the brand new 911 GT3 himself ahead of his stint on the track instead of letting somebody else do it.

For those who might not be aware of this, a new car needs a short breaking in (or running in) period where it has to run consistently at a moderate level compared to its full potential. It's one of the most boring processes you can imagine as you're not allowed to go over a certain rev limit, which is akin to torture in a car that gets its maximum power at over 8,000 rpm. And yet Chris Harris volunteered to put 1,000 miles on the GT3's clock under these conditions because that's how much of an event driving one of these cars is.

It turns out he wasn't disappointed. Not even the 500-odd hp output (503 hp/510 PS), a number that seems to have stagnated over the past decade and could feel a bit underwhelming in today's market, is a real issue with the car. You can see everything Chris had to say about the car—as well as a few drifts—after the 1,000-mile trip around the country and an extended track session in the clip below. 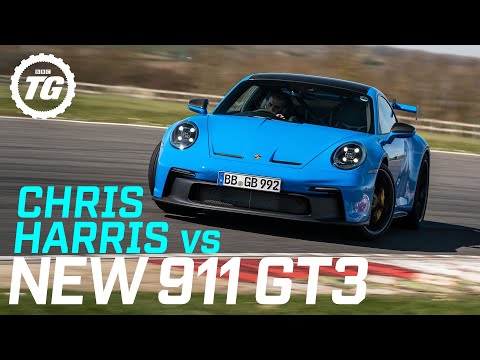