2 Volkswagen XL1 and e-Golf Are the New Starship Enterprise

3 Mr. Spock and Captain Kirk Will Promote the Volkswagen e-Golf

There is an endless polemic between Star Trek and Star Wars fans. However, if there is anything both sides agree with is that the two series featured some of the greatest spacecraft in the history of Sci-Fi filmmaking.
1 photo
The USS Enterprise is one of the most popular spacecraft in the Science Fiction film industry. Even though it took all sorts of shapes since 1966 when the first movie came out, the one this building was shaped after sure is the right one.

What you’ll see in the video below is, in fact, the headquarter of NetDragon Websoft, a Chinese gaming and mobile Internet company. The owner spent $160 million to make his childhood dream come true.

And before you go all “of course it’s a Chinese guy” we’ll tell you that this building is, in fact, the only officially licensed Star Trek building on the planet. According to Mashable, Company Chairman Liu DeJian somehow managed to license the rights to build an Enterprise replica from CBS. It took six years for the USS Enterprise structure to be finished, but you have to admit it’s something else.

The building itself is impressive, but who’s to say we’re not going to see a spacecraft the same shape gazing the skies soon? After all, there is an actual Enterprise conceptual superluminal ship designed by NASA scientist Dr. Harold White, born with the goal of achieving warp travel. The hypothetical spacecraft would be a modified version of the Alcubierre drive, which, in theory, would make Star Trek faster-than-light travel possible. 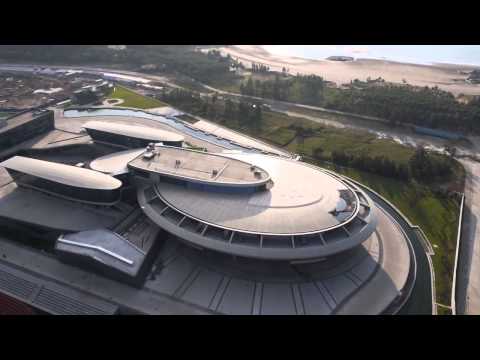