KTM RC16 MotoGP Is Out on the Track, Testing

It’s been in the preps since Mao was around, back in the 1970s, but the communist country did not manage to deliver until now. A Chinese narrow-body jet that can seat 168 passengers has now rolled off the assembly line, starting a new economic competition in the aviation industry between the Asian giant and the West.
1 photo
It may seem like a small deal for some, but China’s new airliner is not just the first big passenger plane to “hit the road,” but represents the premiere of what should be the long-awaited birth to a transport industry. According to AFP, for the country, the plane represents at least seven years of efforts in a state-mandated drive to reduce dependence on European consortium Airbus and US-based Boeing.

“China’s air transport industry cannot completely rely on imports. A great nation must have its own large commercial aircraft,” the country’s civil aviation chief Li Jiaxiang told an audience of government and industry officials. Sure, the 39-meter (127-foot) long plane may not be the famous Airbus A380, a large-double deck, wide-body, four-engine jet airliner that can provide seating for 525 people, but then again, that thing is the largest one in the world.

“The rollout of the first C919 aircraft marks a significant milestone in the development of China’s first indigenous aircraft,” said Commercial Aircraft Corporation of China (COMAC) chairman Jin Zhuanglong. The Shanghai-based company’s official explains that the new airliner has a range of up to 5,555 kilometers (3,444 miles) and that it will make its first test flight next year.

The new airliner may be China’s first big passenger aircraft to be domestically produced, but foreign companies are playing key roles in supplying systems. For instance, the engines are made by CFM International, a joint venture between General Electric (GE) of the US and France’s Safran.

How many of these will reach the skies? Well, according to COMAC’s statement, already 517 were ordered, with most of them by domestic buyers. Thailand’s City Airways will get ten. However, the aircraft is still far away from being allowed to fly in US airspace, considering the Federal Aviation Administration’s certification. Moreover, delivering to customers will also take years, as industry officials don’t expect the plane to enter service anytime sooner than 2019. 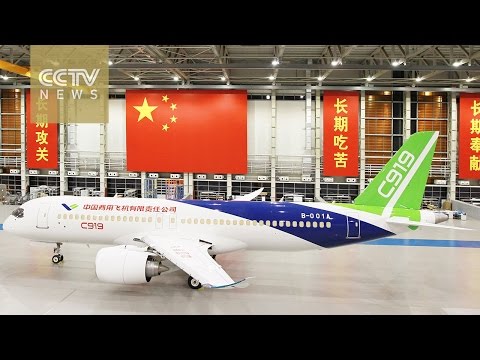