1 Clever Marketing Stunt Goes Viral, It's Not What Everyone Imagines

4 Wedded Couple Levitating Off the Side of a Double-Decker Steals the Show in China
Car video reviews:
Coverstory

China Presents Self-Driving Tram That Uses Wheels Instead of Tracks

Public transportation is a field where scientists, inventors, and city administrations are struggling to discover the next big innovation.
1 photo
China is known for its issues with congestion and the resulting pollution, so its citizens come up with new ideas more frequently than others. Evidently, Elon Musk is still on our minds here with his tunnel company, but China has a different way of doing things.

The latest news in this field from the country with the biggest wall in the world is about a tram that replaces metal rails with paved roads, which can also drive itself. It sounds like a fantastic idea, especially since it can carry about 300 passengers without a hitch.

The creation is called ART, and these letters stand for Autonomous Rail Rapid Transit. It was developed by CRRC, a Chinese rail transit company.

It may seem strange that a firm that makes most of its business using tracks designed something that does not use them, but the 30-meter-long “bus” is impressive regardless.

It is a fully electric vehicle, and it could drive itself on a predetermined route using a white line drawn on the pavement. It makes sense to us, but we still wonder what would happen if the paint would fade, and what effect will snow have on the same route.

In the future, the company claims that its creation could carry up to 500 passengers, which should help free up traffic and crowded boulevards if people would have an alternative means of transportation they could rely upon.

The advantage of the new blend between a  "tram" and a "bus" is that it is cheaper to deploy than a conventional unit, and it should be more comfortable and more silent. The first test line will be opened in early 2018, Demilked informs.

While the existence of public transit is great in any city, and an essential part of the civilized world, other aspects make the bus, tram, and metro a viable alternative to the automobile. Public transit needs to ensure reliable operation, occupant safety, affordable prices, well-planned routes, and cleanliness.

Nobody wants to ride in a dirty bus after waiting for 20 minutes in a station that does not even have proper seats, and many cities realized this many years ago.

The other problem lies in the schedule of public transit, which is restricted at night in many places, which leads to additional costs for those who work in shifts. 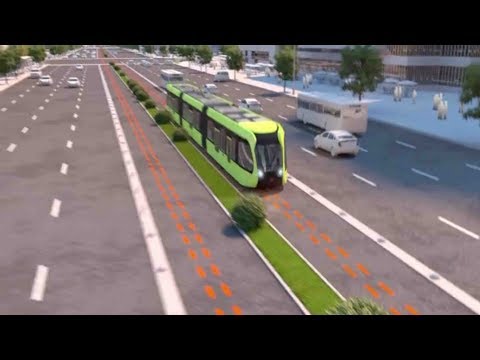