The Mustang Is Beating Chevy's Camaro in Canada 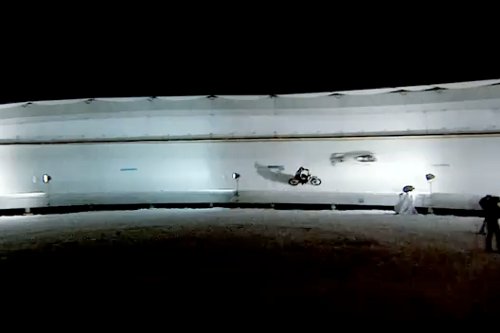 Specifically, Pfeiffer rides a BMW G450X motorcycle on a frozen bobsleigh track in Innsbruck, speeding in the opposite direction of a fast sliding bobsled, piloted by Langen.

The result is quite impressive. This spectacular stunt is a pleasure to watch, so we invite you to take a look at the footage below this article. In the video, Langen started at the top of the run and Pfeiffer at the bottom on his BMW G450X. Timing was critical, and eventually Pfeiffer and Langen ran each other passing side by side on one turn.

Since 1996, Chris Pfeiffer is a professional rider and has performed in hundreds of shows internationaly. He has made several records, such as becoming the first person to climb the 'Via Tina', a level 3 difficulty scale climbing route in Arco/Italy with the motorbike.

Pfeiffer has also performed the longest jump over 33 people lying next to each other without a ramp or any other special help on the home stretch at the Motocycle Grand Prix 1997, on the Nurburgring.

On the other hand, Christoph Langen has had a great influence on the development of bobsleighing as a sport in recent years. He has also become a highly skilled bobsleigh builder, developing runners for every kind of weather.