Chevy Trailblazer Pickup Thinks It's a New Montana, Might Miss the Tracker Point

While it feels older than SUV life, the Trailblazer nameplate has only been in use at General Motors since 1999. Over the years, though, it did evolve to become something new on different occasions.
19 photos

Everything started in 1999 when General Motors awarded the TrailBlazer moniker to an appearance package dedicated to the Chevrolet S-10 Blazer until 2002. Then, it morphed into the Chevy Trailblazer mid-size SUV that became the successor to the S-10 Blazer. Since 2020, though, it shrunk to subcompact crossover dimensions to make room for the ill-received Blazer mid-size.

Quite a periplus, if you ask us, and it does not even end once it crosses the digital threshold into the virtual realm. There, the pixel master better known as SRK Designs on social media has recently decided to play with the perspective of the Trailblazer subcompact SUV morphing into the third-generation Chevy Montana pickup truck. But, in the end, it may or may not have missed an important mark because the Montana nameplate is going through some monumental changes of its own.

The latter appeared in 2003 as an FWD coupe utility pickup truck sold in Latin America and some emerging markets. And it lived a fruitful Ute life during its first couple of generations before General Motors decided it was time to address the North American Ford Maverick and Hyundai Santa Cruz menace with a unibody compact pickup truck of its own. So, an upcoming third-gen Montana has changed the body style and will feature a four-door double-cab configuration for the first time.

Here, the CGI expert imagined a Chevy Trailblazer subcompact crossover SUV growing in size to accommodate a potential Montana-like unibody compact pickup truck style. But the rumor mill thinks a different Chevy will be the organ donor for the Montana transformation. Thus, instead of the South Korea-produced Trailblazer, that would be the GEM-platform Tracker, which is already being manufactured in Brazil for the Latin American markets. 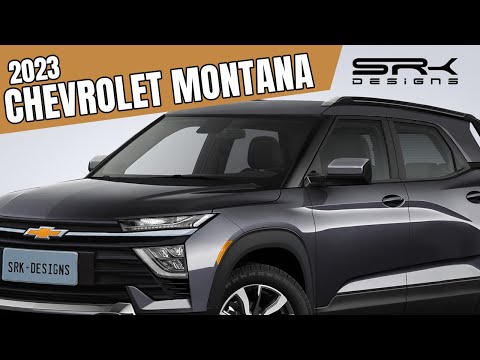