5 C7 Chevy Corvette ZR1 Drags R35 Nissan GT-R, Grudge Race Is As Close As It Gets
Car video reviews:
Up Next

We are increasingly growing fond of the recent string of videos featuring so-called grudge matches. After all, it looks like everyone is having a great time, racers and the public included. And there’s no hubris included.
9 photos

Grudge races usually tend to follow heated arguments. Or, before major events, they are simply used to test the setup of the car and the mettle of some of their competitors before eliminations. But as far as this event is concerned, it seems that everyone is thoroughly relaxed and having a great time on and around the track.

Because of the complete lack of background information, we shied away from any appraisals for a while, but this is not the first time we have seen racers ducking it out in a grudge race at this particular location. Or even the second one, as a couple of different R35 Nissan GT-Rs were previously the focus of what appears to be a veritable import versus domestic “war” brewing on.

Interestingly, this battle seems to follow the same pattern, even though one might initially consider this as just another installment in the ongoing quarter-mile Detroit Three feud. But the Chevrolet isn’t one of the usual dragstrip suspects, and instead, we are dealing with a blacked-out Chevy SS – a veritable (VF) Holden Commodore in disguise, equipped with the 6.2-literLS3 V8 shared with the C6 Chevy Corvette.

Proudly representing the (truly) domestic side of the market was a white Dodge Charger SRT Hellcat. Which, in case these vehicles arrived in stock form, should have had no trouble beating the Chevy SS. But, as always, one needs to expect the (aftermarket) unexpected at the strip, so in the end, it turned out the American sedan with Aussie DNA had the upper hand.

And the winner’s white light, because these grudge-matches traditionally give no information about the ETs and trap speeds. By the way, thanks to a user comment, we finally got to settle a curiosity: the track in question is Lapeer International Dragway in Lapeer, Michigan. 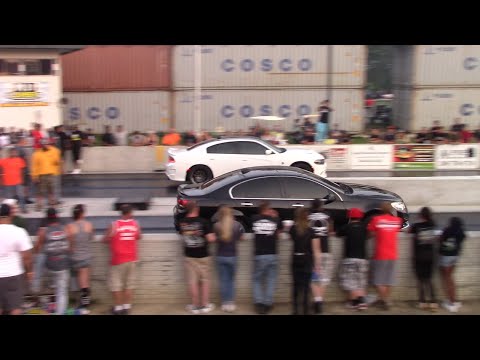