2 2021 Dodge Durango SRT Hellcat “Excess” Review Has It All, Including McDonald's

In the world of social media, there’s nothing feistier than automotive aficionados calling out on each other to see which one has the biggest, maddest, fastest ride at the strip. So, without further ado, let’s check out what happened when DonkMaster’s Chevrolet Monte Carlo met Racer X’s Hellcat and Demonology’s, well, Demon.
31 photos

We have seen many timeless drag strip encounters with the Dodge heroes, in all sorts of permutations involving the Charger, Challenger, SRT, Hellcat, and Demon. Some of them attained ET and mph perfection, others saw the lady of the family teach everyone else a lesson, while others even gave us the chills of brotherly rivalry.

Just recently, we also got reacquainted with a very interesting Chevrolet Monte Carlo that’s not only tuned beyond belief (30 PSI for the latest encounter) but also a hugely proud representative of the donk side of things. Yep, it’s the same “Black Blur” that made short work of a tuned Porsche 911 Turbo previously.

The action taking place at the same “The Big Showdown YouTuber Callout” event (Texas Motorplex in Ennis, Texas, a.k.a. “where speed was born”) doesn’t feature an import this time around, as it’s as American as it will ever be. Granted, there’s no Blue Oval involved this time, but we’re still satisfied with the Hellcat and Demon roster.

As such, the fourth-generation Monte Carlo is obviously the star in any crowd with its modern features (we can’t get a peek under the hood, but the LED headlights are so cool) and huge, 24-inch gold-shaded Forgiatos. More importantly, it hides a lot of power under the hood and DonkMaster has been winning against all sorts of Hellcats for quite a while now.

We’ve embedded a couple of videos from the LifeOfRIQUE and RacerX channels on YouTube below, but the best references are brought on by the latter, which also includes on-board footage from the race between Black Blur and the “Xcesiv” Dodge Charger SRT Hellcat (from the 7:11 mark).

Later on, from the 13:05 mark, you can also watch the skirmish with Demonology’s own Dodge Challenger SRT Demon, but we have to say these vloggers still have a thing or two to learn about quarter-mile professionalism because they’re not giving us the ET/trap speed footage or the time slips.

No worries, though, because the action compensates for the shortcomings, along with the fact that both the Hellcat and Demon settle the donk grudge match in their favor. 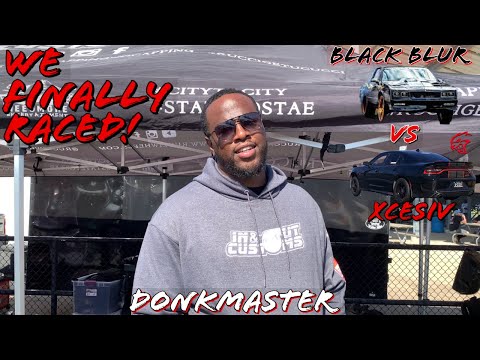 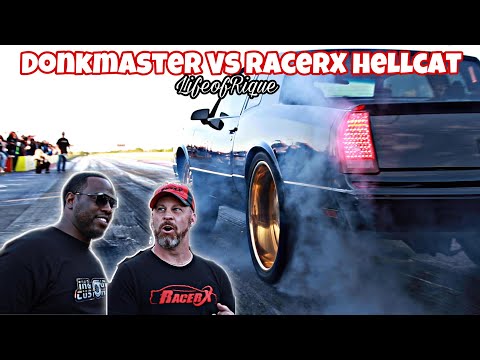