1 Cosworth Used This Single-Cylinder Engine in Development, It Makes 90 HP

2 Gordon Murray T.50 Heading to Goodwood Next Weekend for Public and Dynamic Debut

3 The Story of the Pontiac Can Am, the Forgotten Malaise-Era GTO

During a decade when American carmakers built some of their most forgettable models, Chevrolet dared to release a limited edition, a performance-oriented subcompact that featured an engine co-developed with British motorsport experts Cosworth Engineering.

The Malaise era began with the 1973 oil crisis and ended roughly a decade later. It was a dark age for the automotive industry which was forced to discontinue high-horsepower, gas-guzzlers and develop fuel-efficient, emission-compliant vehicles.

One of these vehicles was the Vega, Chevrolet’s take on an affordable subcompact that was designed to fight off the rise of imports. Released in 1970, it was as unspectacular as a small people mover could get, but that changed in 1975 when the lineup welcomed a new, performance-oriented member.

A two-door hatchback coupe, its exterior was not adorned with spoilers, splitters, or scoops that would hint at a limited-production performance vehicle. Except for the black paint with gold accents, there were no visible features that could distinguish it from the standard model, yet this was no ordinary Vega. What made it special was hidden under the hood: an exceptional four-cylinder that took almost five years to develop and benefitted from motorsport tech courtesy of Cosworth Engineering.

Founded in 1958 by former Lotus employees Mike Costin and Keith Duckworth, the British company enjoyed a successful partnership with Ford since 1966, resulting in the legendary DPV V8, which dominated Formula 1 for many years. However, in 1969, Cosworth also joined forces with Ford’s crosstown rivals Chevrolet to design a smaller race engine.

Codenamed Project EA, the powerplant was based on the all-new sleeveless aluminum four-cylinder block that was designed in the U.S. for the Vega. De-stroked from 140 ci (2.3 liters) to 122 ci (2.0 liters), it was equipped with beefier internals, a Cosworth-designed double overhead cam (DOHC) cylinder head, or a dry-sump lubrication system which enabled it to produce around 260 hp. Installed in Chevron and Lola chassis, it proved successful in the 2.0-liter class during its first outings, but a year later, development was stopped due to reliability issues.

Despite GM’s reluctance to prioritize the project which was halted on numerous occasions in the years that followed, the powerplant eventually made it into production in 1975.

Like the EA, it used the standard Vega’s block de-stroked to 122 ci (2.0 liters) and was outfitted with, a heat-treated forged steel crankshaft as well as race-grade forged aluminum pistons and connecting rods. Cosworth adapted the head design, which also featured 16 valves per cylinder and twin cams with aggressive profiles that were actuated by individual gears located on the front end.

Around 60 lbs (27 kg) lighter than the standard SOHC Vega engine, the twin-cam could make 110 hp at 5,600 rpm and redlined at 6,500 rpm, whereas the SOHC Vega engine peaked at 4,400 rpm and ran up to 5,000 rpm. These are unimpressive figures today, but in 1975, a Corvette equipped with the base 350-ci (5.7-liter) V8 was rated at 165 hp. Of course, the unit was capable of a lot more power, but emission standards severely limited its potential. That being said, it was still a marvelous motor that made the Cosworth Vega the only GM vehicle that met emission regulations in all 50 states during the 1975 and 1976 model years.

Apart from the unique four-cylinder linked to a four-speed (five-speed in 1976) manual gearbox., the car was fitted with enhanced springs, shocks, and sway bars borrowed from the Vega GT. It could also be supplied with an optional limited-slip differential.

Chevrolet built only 3,508 units until 1976 and it could have manufactured a lot more if the price wasn’t so prohibitive. The Cosworth variant could be had for nearly double the price of a base Vega, and a Corvette was only $900 more.

For a Malaise-era car, the Cosworth Vega was a refreshing addition that stood out from the crowd of boring people movers. While it never broke any quarter-mile records, it was a fun subcompact with motorsport pedigree that made for a fun daily driver. You can learn more about it in the video below, posted on YouTube by AACA Museum, Inc. 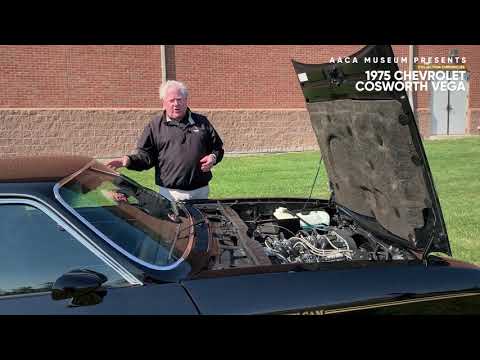