A Short History of Buick’s 3800: One of the Best, yet Underrated V6 Engines of All Time

While many love to call “hi-riser” any vintage car model from the 1970s and 1980s packing huge wheels and a slightly nose-up stance, there are always different shades to this customization subculture. So, do not dare mix a “donk” with a “box.”
26 photos

The average consensus among this popular car customization subculture is that a proper donk is only a fifth-generation Chevy Impala. All others model types from the highly-customized niche should be generally referred to as “hi-risers.” However, subdivisions are also accepted.

For example, Malaise-era Impalas and Caprice models will also be called “boxes” because of their squared looks for the front and rear ends. Case in point, the videographer behind the WhipAddict channel on YouTube knows these customized whips and their owners so well he will not get surprised too often. Still, there are exceptions.

Ergo, a member of the Atlanta, Georgia-based College Park Customs team recently finished yet another “toy” with a few outlandish details that almost “flew under the radar.” Well, sort of, because they are plain and simple humongous. Those would be the 28-inch Zone 3 Deck aftermarket wheels, which took place of the initially envisioned 26-inch setup.

By the way, this third-generation 1977 Chevy Caprice Classic was in a rather dire condition when it first arrived at the shop just six months ago. Alas, the build advanced pretty quickly with additional help from b4naftercustoms (responsible for the shiny paintjob), custom console fabricator Brian Camp, or bespoke sunroof and grille provider khool_kustoms2.

Now, the Box Chevy Caprice rides proudly in true “skyscraper” fashion on the 28-inch brushed/chromed aftermarket wheels. And it is going to stand out in any crowd via the Kandy Teal shade and fully custom, green-trimmed gray interior. Oh, and not to mention it can also deliver a show of force thanks to its modern Chevy LS swap... 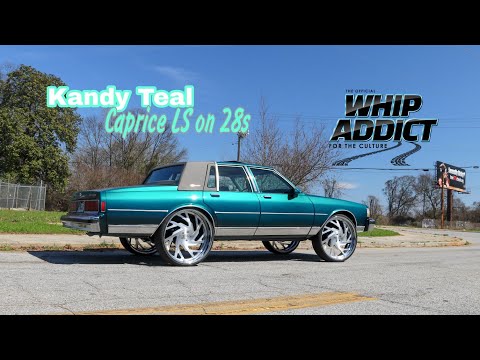