5 1,000 HP Hellcat Winner Almost Misses His Prize After Rejecting Unknown Call
Up Next

Sergiu Tudose
Watching two genuine muscle cars go head-to-head never gets boring, especially when one of them is a Hellcat-badged Challenger and the other the very best Chevrolet Camaro money can buy. As rivals, the two have always put on a great show, with the Camaro even coming out on top in certain scenarios.
6 photos

That being said, things are different on the drag strip compared to everywhere else. Grippy asphalt and grippy rubber are two factors that tend to favor the more powerful vehicle, which in this case is clearly the Challenger.

Unlike the Hellcat’s place in Challenger hierarchy (below the Redeye and Super Stock), the ZL1 sits atop of the Chevrolet Camaro range as basically a high-performance variant of the SS spec model. It too uses a 6.2-liter supercharged V8 engine, the same one you would have found in a Corvette Z06 C7.

The Camaro ZL1 packs a strong punch, there’s no doubt about it. It puts down 650 hp and 650 lb-ft (881 Nm) of torque. Basically, it’s down 50 hp on the Hellkitty, but it has just as much torque and it weighs roughly 600 lbs (270 kg) less. It’s definitely the superior product if you’re out on the race track. The drag strip though, is a different story.

That is where the Hellcat shines and shine it did on this occasion too. The two muscle cars raced twice and each time the Dodge won convincingly. We suspect it had better rubber. 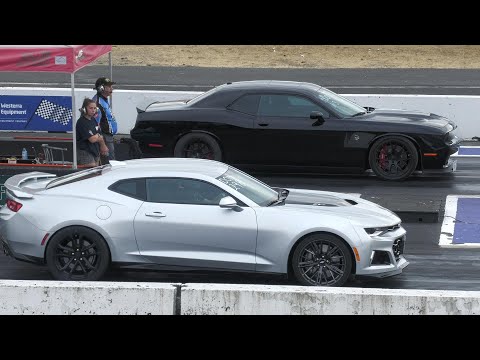