Home > News > U-turn
Sergiu Tudose
If these two cars raced from a standstill, there’s no doubt in our minds that the Tesla would grab the early lead, probably winning the whole thing depending on the distance. Getting your LT1-powered Camaro to hit its factory-rated 0-60 time consistently isn’t all that easy, whereas a dual-motor Model 3 will rocket off the line like a champ every single time you launch it.
6 photos

Of course, this race didn’t take place from a standstill, but a roll. The cars battled twice, once from 20 mph (32 kph) and then again from 40 mph (64 kph), with, dare we say, predictable results.

Let’s look at the Tesla’s numbers first. The uploader says it’s a Long Range variant, which means it’s got a dual-motor setup driving all four wheels, generating a peak output of 450 hp—that is if it’s a newer car and not an early Long Range model.

Zero to 60 mph times depend on model years when it comes to Teslas because originally, the Model 3 Long Range wasn't as quick as it is today. If you visit the EV-maker's website and look up the performance figures for the Model 3 Long Range AWD, it says 0-60 in 4.2 seconds. That’s pretty quick, and let’s not forget that you also get instant torque in a Tesla.

Don’t worry, though, because the Camaro is no slouch. Its power is produced by a naturally aspirated 6.2-liter LT1 V8 engine, rated at 455 hp (461 PS) and 455 lb-ft (617 Nm) of torque. Everything goes to the rear wheels via a six-speed manual gearbox. Shifting gears yourself isn’t exactly ideal when racing something as quick as a Tesla, but the driver of the Chevy did really well in that department.

In the first race, the Tesla jumped ahead as expected but was quickly reeled in by the gasoline-powered muscle car. When they pulled from 40, it was more of the same, except the Model 3 didn’t get an early lead. Ultimately, this is a good win for internal combustion engines everywhere. 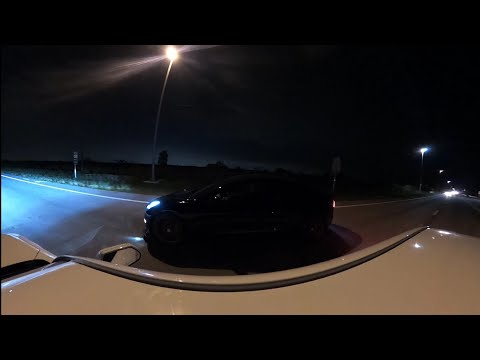