4 216-Mile Shelby GT500 Needs Someone Who Can Drive Stick, Is Good Bang For Your Buck

Sergiu Tudose
Despite being a generation apart, the S197 Ford Mustang and the current-gen Chevy Camaro LT1 share somewhat similar performance characteristics. Seeing them race against each other can’t be anything else but fun and perhaps even informative.
6 photos

The 2011 Mustang GT was the first production Ford model to feature this new naturally aspirated power unit, which in turn offered larger valves, Ti-VCT tech and a higher redline (7,000 rpm). This is when the Mustang GT really came into its own during this modern renaissance, as many people began viewing it as the quintessential muscle car.

As for the car in the video, we’re not sure what model year it is, but we know it’s a 5.0 and according to the uploader, it’s been modified, wearing custom headers and sipping E85. Nothing to scoff at, that’s for sure.

Moving on to its opponent as far as this video is concerned: a sixth-generation Chevrolet Camaro LT1 with ported headers, also running E85 and packing a six-speed manual gearbox. We can only give you the stock figures for the engine, which is a naturally aspirated 6.2-liter V8 with 455 hp and 455 lb-ft (617 Nm) of torque. It’s a very popular power unit, as it is also found in the C7 Corvette.

The two muscle cars raced from a 50-mph (80 kph) roll, and it’s safe to say the Mustang got its behind handed to it – not just once, but twice (the second time they went from 60 mph). The Camaro won so convincingly, there was no need for a third run. 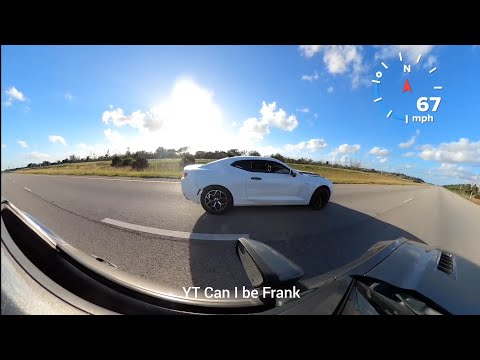 Editor's note: We do not condone street racing because it is illegal and dangerous. Please drive safe and use your local drag strip for any straight line duels.