4 An All-Electric Corvette Prototype is On Its Way, But Not from Chevrolet

Home > News > U-turn
Tudor Rus
The car hacking craze started some weeks ago when two computer guys showed how easily you can hack a Jeep by just breaking into the car's cellular-connected infotainment system.
1 photo
Once this was attained, the men behind the laptops could easily control the vehicle's brakes and steering system, which is darn scary if you ask any sane petrolhead.

In any case, the same stunt was pulled on a Tesla Model S but now a Chevrolet Corvette was hacked for research purposes.

This time, those behind the "intrusion" used insurance black boxes to override the car's controls. We're sure you're familiar with those small, black plastic gizmos that connect your car to the internet, with the ultimate goal of improving fuel efficiency and lowering insurance fees by telling insurance companies all they need to know about your driving habits.

As it turns out, these little boxes are not very safe and could be the crack that hackers might exploit to take over your car's vital functions like steering or breaking.
How did they do it?
A group of researchers from the University of California at San Diego sent SMS instructions to a box like we described above while connected to the dashboard of a Chevrolet Corvette.

That gave them a way inside the network that controls the vehicle's mechanical components. From here, all they had to do was start playing with the Vette's windshield wipers and, more dangerously, activate or deactivate the car's braking system.

“We acquired some of these things, reverse engineered them, and along the way found that they had a whole bunch of security deficiencies,” says Stefan Savage, the University of California at San Diego computer security professor who led the project, quoted by Wired.

This means simple gadgets like those dongles allow outsiders to control almost everything on the vehicle they were connected to. This is scary stuff, no doubt about that. 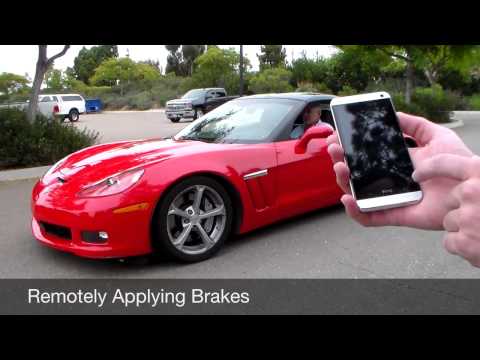