2 Chevy Trailblazer Pickup Thinks It's a New Montana, Might Miss the Tracker Point

What Lucky Lexus Will Drive Julianne Moore to the Red Carpet?

Codenamed Panther, the Camaro wouldn’t have happened without the incredible commercial success of the Mustang. Famously described by Chevrolet general manager Pete Estes as “a small, vicious animal that eats Mustangs,” the Camaro always lived in the shadow of the 'Stang.
12 photos

Discontinued in 2002 due to shrinking demand for sporty cars, the Camaro was revived with much pomp and circumstance in 2009 for the 2010 model year. The sixth generation followed suit in 2015 for the 2016 model year, and every single year since then, it sold fewer examples than the ‘Stang.

Last year, the Camaro sold merely 21,893 units in the United States of America, down from 77,502 units in 2015. By comparison, the archnemesis produced by the Ford Motor Company in Flat Rock moved 52,414 units last year and 122,439 units in 2015. The Dearborn-based automaker’s pony car has also tapped into RHD markets, which was the right call in hindsight.

The Camaro’s downfall became obvious in December 2018, when the media reported that Camaro chief engineer Al Oppenheiser would oversee the development of electric vehicles at General Motors from January 2019. Come June 2019, multiple sources within General Motors claimed that GM had axed the seventh-generation program. Two years after that, Automotive News heard through the grapevine that a Camaro-badged sedan would replace the hard-topped coupe and soft-topped convertible in the future.

Not just any sedan, though, but a zero-emission one of those. Whatever the future may hold for the ailing nameplate, there’s no denying that General Motors is all in on electric vehicles. The biggest of the Big Three in Detroit intends to phase out fossil-fuel cars and trucks by 2035, which is a paradigm shift for both the Detroit-based manufacturer and its dealership network.

Given the inevitable that awaits us in a little more than a decade’s time, pixel artist Marouane Bembli has imagined the seventh-generation Camaro in the guise of an electric coupe. Obviously inspired by the Equinox EV, the front end of this design study is certain to offend pretty much all purists.

The question is, should General Motors take the initiative and surprise FoMoCo with the world's first series-production electric pony car? 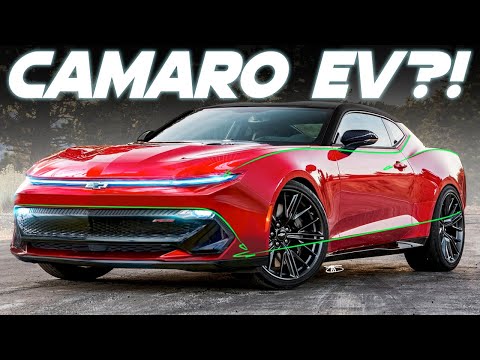