1 Next Generation Prius Being Delayed Over Design Issues

Home > News > Industry
Gabriel Brindusescu
As you might know, the Toyota Prius c (Aqua in Japan) received some changes for 2015, including a new front bumper that gets inspiration from the GT 86/Scion FR-S sportscar. However, if you’re in the Land of the Rising Sun, the Aqua is also offered as a mini crossover that just got unveiled this month.
9 photos

It’s called the Toyota Aqua X-Urban and comes with crossover elements like a raised suspension (up to 20 mm), side mud guards, exclusive 16-inch rims as well as some added lower clad on all sides.

It can also be had in two-tone exterior color setups while the interior comes in either base black with gray or a more appealing black with brown trimmings and a combination of synthetic leather and fabrics making up for the upholstery.
The numbers
Power comes from a refined Toyota four-cylinder that makes 75 hp and 111 Nm (82 lb-ft) of torque, aided by an electric motor part of the CVT which offers 61 hp and 169 Nm (124 lb-ft). Acceleration doesn’t really matter here, but this hybrid can achieve a fuel consumption of 33.8 km/liter (2.9 l/100 km or 79.5 mpg) according to the Japanese JC08 test cycle. 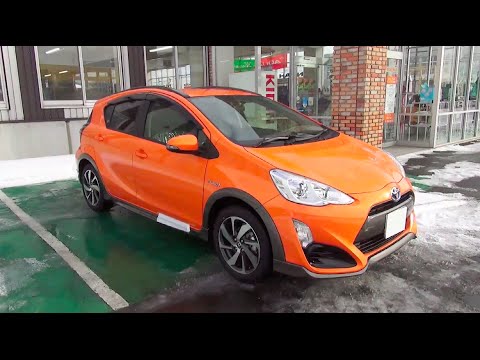