The lineup you’re about to watch consists of a Dodge Challenger Hellcat, a turbocharged LS-swapped Mazda RX-7, a turbocharged S550 Ford Mustang, a turbo SN95 Mustang, the previously mentioned Vette, and a turbo fourth-generation Trans Am. What they all had in common was that they all raced against this green Charger Hellcat, and nearly all of them were defeated by the muscle-bound sedan.

Meanwhile, we counted just one defeat for the Charger, and it was against the Mazda by 0.07 seconds—also known as how close George Russell usually comes to making Q3 in Formula 1 nowadays.

Every single remaining race felt like a breeze for the Charger until it met up with the turbo Trans Am at the very end of the clip. The Pontiac posted a blistering quarter-mile time of 10.05 seconds, basically 10-seconds flat, which was better than anything the Charger had previously done up to that point. However, it made no difference in the outcome because the Hellcat-powered Dodge ultimately crossed the line in 9.99 seconds. That’s an awesome way to win a drag race.

Revealed to the world back in late 2014, the Dodge Charger SRT Hellcat is powered by a 6.2-liter supercharged Hemi V8 unit with 707 hp (717 PS) and 650 lb-ft (880 Nm) of torque. At the time of its unveiling, the Charger Hellcat was marketed as the fastest factory four-door sedan ever made. 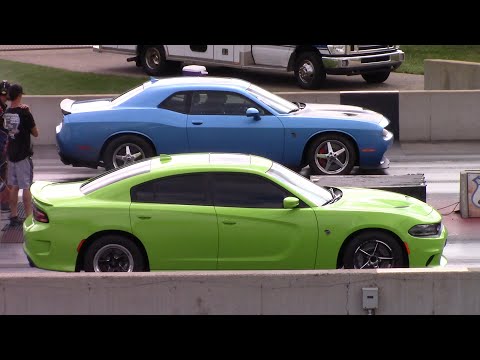