As Ford’s most powerful production model ever, dethroning the GT supercar, the Mustang Shelby GT500 has already made a few victims down the quarter mile. However, as it turns out, the Dodge Charger SRT Hellcat isn’t one of them.
7 photos

That’s right, a four-door vehicle, albeit a very punchy one, taught it an important lesson in fast takeoffs and crossing the finish line first in a drag race held recently at the Mission Raceway Park, over in Canada.

Not many petrolheads know this, but the launch control function in the pony car has a one second delay, so the driver needs to take this into account when preparing for a fast takeoff. Unfortunately for the one holding the wheel in the blue-finished example, they didn’t, so the mighty Charger took off like a bullet and maintained its lead all the way to the end.

As for the actual times posted by both cars, they were definitely nothing to write home about. The Mustang Shelby GT500 completed the quarter-mile in 11.54 seconds, at a little over 123 mph (198 kph), whereas the Charger SRT Hellcat did an 11.48, at almost 124 mph (200 kph). So, with a perfect launch, the two-door Ford would have had no problem beating the four-door Dodge, but hey, no one’s perfect, right?

Probably looking to secure a win against the Mustang Shelby GT500 too, like its sibling, a Challenger lined up at the start line next. Nonetheless, by now, the driver of the supercar-rivaling (in a straight line, anyway) muscle car knew what they have to do to secure a perfect launch, so the vehicle took off like crazy and maintained its advantage to the end. You can see the times of both cars and their speeds in the video that follows, which is only three and a half minutes long. 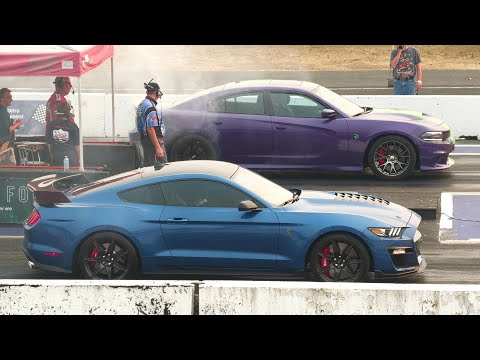