What we have here is an exciting lineup of cars going head-to-head from a roll. The three raced several times, and each time the result was pretty much the same, albeit still fascinating to watch.
6 photos

Let’s start from the bottom and work our way up; no offense to Mustang fans. The truth is this tuned Shelby GT350 easily puts down the least power here. Yes, it does have a cat delete/E85 setup, but that’s not going to add a great deal of muscle to what its 5.2-liter flat-plane crank V8 engine already produces—namely 526 hp (533 PS) and 429 lb-ft (582 Nm) of torque.

That appears to be the same car that did really well in a race against a C8 Corvette Stingray yesterday, so its overall performance should not be underestimated. Besides, the Mustang is the most lightweight car here, which does matter.

Next up the pecking order is what the uploader confirmed to be a 2015 Dodge Challenger SRT 392. With the help of a Whipple supercharger (which will cost you around $8,000 for a car like this), it now produces 630-wheel horsepower, which should be roughly 750 hp at the crank. That’s more than a stock Hellcat.

Redeye models also come with an upgraded ZF 8-speed automatic gearbox, track-tuned suspension, and a few other mods helping them deal with the additional performance.

As for how these three cars did here, you can see they’re pretty much even for the first second or two. Afterward, the inevitable happened. 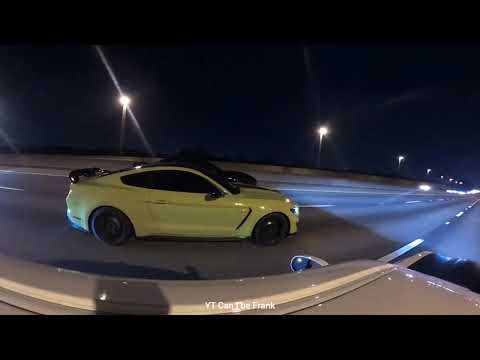