5 Volvo City Car CGI Gives off Suzuki Ignis Vibes, Is Both Fugly and Cute at the Same Time
Car video reviews:
Up Next

Not long ago, the North American compact pickup truck segment was nothing but dust and memories. Today, though, everyone seems to want to join in on the Ford Maverick and Santa Cruz action.
9 photos

With the rise to new fortunes of everything crossover, SUV, or truck-based, it was only a matter of time before automakers started digging up the past. And while Hyundai did it first, joining the American light pickup truck segment with the ritzy Santa Cruz, Ford has arguably done it a lot better – at least based on the pocket-sized Maverick’s sales so far.

Naturally, the rumor mill has quickly caught whispers of others trying to join the revived compact pickup truck party in hopes they could snatch an even bigger piece of the pie. And who else could better hope for a big slice of the unibody truck pizza than Toyota, a carmaker that is ruling undefeated the mid-size segment with its ubiquitous Tacoma?

And just like Ford, they are going to look back into their glorious past, thus staging a comeback for the Stout light truck that was previously manufactured between 1954 and 1989. Naturally, this idea – which should be taken with a grain of salt until we have official confirmation – has quickly made its way into the virtual automotive realm.

Over there, the Halo oto channel on YouTube provides fresh automotive information that is corroborated with their virtual designs, so they recently thought maybe it’s the ripe time to revive the Toyota Stout. All the hypothetical information is joined by their resident pixel master’s take on the light pickup truck matters, plus an interesting powertrain thought.

So, what if the Japanese automaker not only offers a gasoline engine, but also ups the stakes with a plug-in hybrid transplant from the current Toyota RAV4 Prime? That would be cool, even if it would come detuned from the SUV’s 302 horsepower! 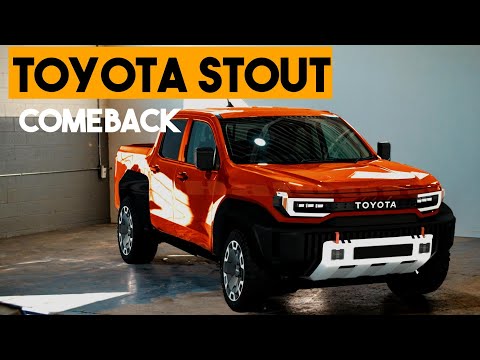