5 Unofficial 2023 Jeep Comanche Is Here To Give the Ford Maverick a Hard Time
Car video reviews:
Up Next

Panasonic Considering Kansas or Oklahoma for Its 4680 Battery Cell Factory

Today, Porsche is doing great in the sustainability field. They are diligently preparing the second-generation Macan crossover SUV as a fully-electric offering, and their Taycan line has already expanded nicely.
17 photos

Born to show that legacy automakers also know how to follow Tesla’s battery-electric recipe, the Porsche Taycan series has struggled to improve the mix by also adding a couple of five-door shooting brake variations into the fold. And the Taycan Cross Turismo or Sport Turismo are not inherently bad, they are just… different.

Of course, that does not really matter too much across the virtual automotive realm where pixel masters will take anything and imagine something completely bonkers… though not necessarily better than the real deal. Although beauty is always in the eye of the beholder, and we are not going to hold it against anyone for thinking differently, we feel that is also the negative case with this little digital project.

The virtual artist better known as Theottle on social media has decided to tempt our imagination with the illogical assumption that a shorter, fatter-looking, three-door Taycan is better than the real Sport Turismo deal. Well, it is not going to be everyone’s bulky cup of tea, for sure, and perhaps that is owed to a simple issue.

In the description, the CGI expert declared this as a half-thought idea – the initial strategy was to present us in the latest behind-the-scenes making-off video a rendering with the Porsche Cayman Shooting Brake. However, it turns out the “idea of cargo space on top of the (rear) engine” was not viable for the artist’s imagination and he switched to an EV strategy.

The (half-baked) result was this Taycan Sport Brake, a three-door Shooting Brake interpretation of the real-world Taycan Sport Turismo. Well, it is certainly something that Tesla would never think of producing, right? So, at the very least, it would have little to no competition… 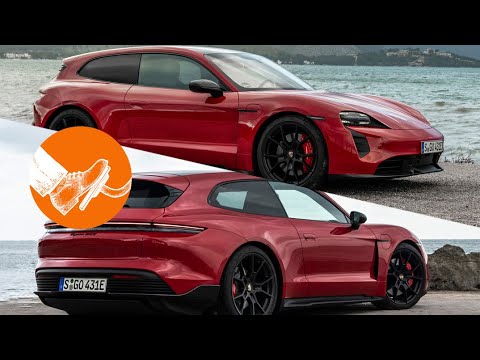