1 Owlight Is One Discreet Bike Light, Only Visible When in Use, Can Be Rotated 360 Degrees

4 This Bike Is a Real-Life Transformer, Turns Into a Full Home on Wheels

With the goal of optimizing activities in every way possible, a project from FH Joanneum University of Applied Sciences has surfaced where we are presented with what seems to be the ultimate bikepacking machine, Cercle.

In French, the word ‘cercle’ means circle. Having a look at the trinket, you can guess how this bike got its name, that massive circular frame. What Cercle is, on the other hand, is a bikepacking machine that’s designed to be an all-in-one vehicle offering everything you need to go from one campsite to another, and in the process, completing tasks like work, rest, and play.

This invention is a design by Bernhard Sobotta, a student from the FH Joanneum University. And while the university's website doesn’t give out any details about the design other than the video found below, an interview held with Bikecitizens reveals more of what’s happening here.

So, what is happening here exactly? Well, it all started like most other things, with an idea, an idea to incorporate a hammock into a bicycle. From there, hours of research later, Bernhard dropped the hammock bit and focused primarily on introducing a sleeping or relaxation space. With new plans in mind, it was time to create what would become known as Cercle.

Now, the way the bike works is rather simple, after all, simplicity attracts as many eyes as possible. As you can plainly see, the entire bike is set on a circular frame and within that frame, Bernhard introduced a pliable lounge chair that’s also to be used as a sleeping, working, or relaxation area.

This is part of what gives the Cercle its power. One of the lounge’s positions, aside from the obvious, is that of being used as an upright seat. In this position, a flip-up table is found at the foot of the lounge and can be accessed to be used as a dining table but also as a place where you can prep a quick meal, ready with hob support and cutting surface. This same table is also to be used for work in case you have to take your job with you on your travels.

Part two of the story is that of being a very capable workhorse. With mounts for pannier racks at both the front and rear of the bike, having to bring along things like clothing, foods, drinks, and even tools in case of any unexpected turmoil, should be quick, easy, and simple. Honestly, once fully loaded, this bike looks like it’s helping you move to a new town or something.

As for the question on everyone’s mind, how is this thing ridden? Well, apparently no differently than any other bike on the market, even handlebar positioning looks proper. By the looks of it, steering is handled by a set of wires, and you will have that rounded tubing sitting in front of you the whole time.

So, when are we expected to see this wonderous machine on the market? Well, not anytime soon, as there are just two Cercles and they will be tested during autumn 2021, with a crowdfunding campaign starting on May 1st, 2022.

By then, the Cercle will have seen a few more modifications and some finetuning, but the finished product should be something that will forever change the face of bikepacking and off-grid cycling. No word on what sort of prices to expect so do keep those eyes peeled. 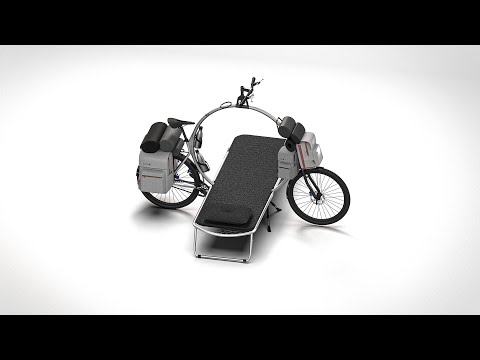