3 This Indestructible iPhone 11 Costs $5,000 and Looks Like a Tesla Cybertruck

4 The Ultimate Luxury: A Phone App to Order Champagne on Board a Cruise Ship

Tesla, for all its faults, shortcomings or whatever else you might want to call them, is about pushing forward a more sustainable means of transport. As Elon Musk said in a very recent interview, the future can only be electric when it comes to personal cars. The planet can’t afford it not to be.

October is autoevolution’s Tesla Month and, in between talking about all-things Tesla, Tesla batteries and tech, and the occasional rumor or renderings, here’s a story about a Tesla-related product that’s at the opposite end of everything the carmaker stands for. Here is a gilded iPhone branded with the Tesla name and with a solar panel strapped to the back, as a rather ridiculous attempt at being woke on the part of a brand that deals in outrageous luxury.

That brand is Caviar, a Russian outlet that does accessories in gold, titanium and everything else you can think of that sells in the thousands of dollars. It’s not the only Tesla-dedicated product from Caviar, but it was the first: the Caviar iPhone X Tesla, which was released in 2018.

We’ve discussed other Caviar products in previous stories. Because there’s a market for customized, outrageous luxury, Caviar makes iPhones that double as golden tourbillon watches slash slabs of gold in fancy-pantsy dressing, iPhones that are tributes to Elon Musk’s attempts at reaching Mars and even Cybertruck-inspired iPhones.

They all have in common an absolute sense of shamelessness in their approach to modern luxury: they’re gaudy, tacky and, because they’re limited-edition, painfully expensive.

The iPhone X Tesla was no different, except for the fact that it tried to take Tesla’s approach to sustainability and use it to sell a gadget that was anything but. It did so by slapping an actual solar panel on the back of the phone.

The iPhone X Tesla was actually an iPhone case that was attached to an iPhone X. Whenever Caviar puts out a new accessory, it includes the product it’s meant to accessorize and the conversion is not reversible. In this particular case, a second battery was included, which added thickness to the original Apple product and made it look particularly tacky.

The case included a carbon base and titanium, 24-karat gold rims, a solar battery charge indicator, a shock resistant solar panel, and a gold plate near the camera, because why not. Delivered in its own wooden box with black silk interior (to hell with Apple’s white boxes!), the case was IP67 water and dust resistant, with the solar panel said to top up the battery either when exposed to direct sunlight or under a bright lamplight.

Caviar initially aimed for just 99 items of the iPhone X Tesla but because demand was so high during pre-order stage, eventually made and delivered 999 of them, each numbered. The plan was to send the first one to Elon Musk himself, with the phrase “Made on Earth by humans” engraved on the case as a one-off – a tribute to Musk’s choice of printing it on the circuit board of the Tesla Roadster he shot into space.

Each iPhone X Tesla was shipped to the country of destination free of charge, with Caviar imagining it in the hands of “the astronauts, pioneers, people who make great discoveries on the edge of human capabilities.” In keeping with its triple inspiration: Nikola Tesla, Elon Musk and Steve Jobs.

Pricing for the iPhone X Tesla started at $4,500 for the 64GB model and went all the way up to nearly $5,000 for the 256GB one. But hey, you could always find consolation for spending this much money on your phone by having it charge from the sun. Just imagine the difference this made on your electricity bill.

All jokes aside, the Caviar iPhone X Tesla was an instant hit: not a single item was left from the 99 made. Which probably goes to show that people will pay a lot of money for anything with the Tesla name – or to seem woke even when they’re not. 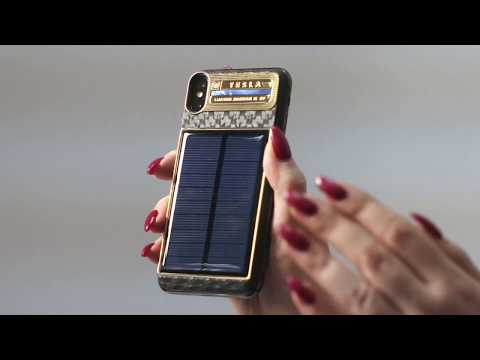