1 The Caterham Super Seven Gets a LEGO Version

3 DJ Example on His Love for Cars: Basically I’m Just a Big Hypocrite

I've always suspected that if Caterham fitted its cars with a pair of wings, they would make for an excellent substitute of the WWII fighters. They don't go very fast, but they look cool and are terribly loud. Plus, given their well-known lightness, they might even have a chance of flying.
1 photo
Caterham's latest commercial spot takes this idea and brings it into more modern times, turning the company's famous Seven model into the world's first two-seater airliner. It may lack some basic amenities such as stowage compartments, but at least flight attendants aren't missing.

Giving us one more example of the fabled British humor, this clip imagines what it would be like if the sports car manufacturer were to go through a mid-life crisis and decide to rebrand into Caterham Airways. A client unaware of this sudden change shows up for a test drive and is greeted by a Caterham employee who asks him to take a seat in the car and wait for the driver to show up.

Cue the elevator music, a flight attendant dressed in red and we're all set for the most tedious part of any flight: the safety briefing. Well, since this isn't your ordinary airline company, the presentation isn't going to be as boring as one might expect.

Since we've already established this is British humor, expect a hefty dose of self-mockery, like the fact that the Seven doesn't offer a space for something as small as a briefcase. But the real icing on the cake is the so-called safety card in front of the passenger that reads: "Passengers are requested not to: a) vomit; b) cry; c) soil themselves; as these may distract the pilot."

Speaking of "the pilot," he looks the best possible impersonation of a Stig without the helmet: no emotions, no human interaction, just driving. As for the passenger, after being splashed with water for no reason, after dropping his phone during take-off and doing burnouts and drifts, he's still naive enough to reach out for the glass of martini that the flight attendant hands him.

I would have said "no, thank you." knowing all too well what was going to happen next (splash the drink in my face and probably choke on the olives). Luckily for us, he takes it. 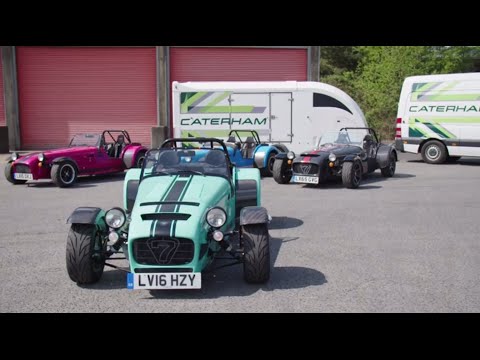