1 Bagged Lexus GS Is a Nice Thing To Look At

3 Lexus IS F Sport on Vossen Rims Makes You Drool

5 Twin Turbo Lexus GS Drifting on Vossen Jewels
Up Next

Home > News > Tuning
Gabriel Brindusescu
Looks is only part of what makes a car nice. Yeah, it plays a major role but if it sounds like a blender, people will say it’s an... appliance, which cuts off some of the cool factor.
1 photo
The 2014 Lexus IS F Sport definitely has the looks. Some consider it the best looking sedan now, but even if you get the one fitted with the 3.5-liter V6, it’s still going to sound like a hairdryer. Of course, normal people won’t be bothered about this, but car guys know that the V6 engine is one that can sing pretty nice if they ever heard the new Jaguar F-Type fitted with a similar engine.

But don’t worry, because the a catback exhaust is here to solve the problem. Well, it won’t really make your IS pop like an MG42 when you lift off the acceleration, but it will make it sound pretty mad. For example, check out these two IS’ in the videos bellow. One comes with a classic catback, while the other sports a variable exhaust system, which are basically some valves that can bypass the mufflers.

For the uninitiated ones, the catback exhaust is the piping that comes right after the catalytic converters, including the muffler. For sporty sounds and maybe some extra horses, the stock one can be replaced with a slightly larger diameter one with empty mufflers. 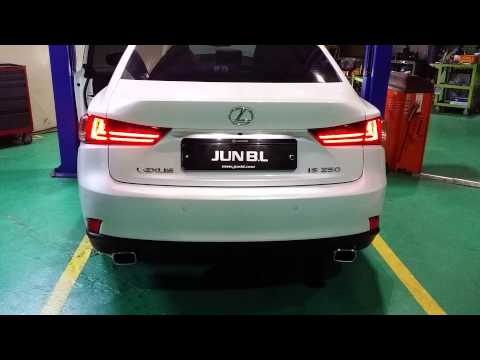