5 2023 Porsche Cayenne Facelift Spied on the Nurburgring, Is Ready to Rumble
Car video reviews:
Up Next

Mat Watson's rise to fame coincided with the growing popularity of online videos showing drag races between cars that, generally speaking, were not built with that purpose in mind.
7 photos

One could argue that, when it comes to Mat and drag racing videos, it's even a case of chicken and egg: it's hard to tell for sure whether carwow's main man rode on the popularity wave of this type of clips, or he's actually part of why they became so prevalent.

However, his ride-along with Misha Charoudin, former race driver, Nordschleife instructor, and fellow YouTuber, shows there's a very good reason why Mat specialized in drag racing – well, two reasons, but we'll focus on the one that's most relevant to our subject: he isn't the world's most accomplished racing driver (the second one is the high number of views they tend to get).

Don't get me wrong, Watson is still definitely way better than your average steering wheel spinner, yet it's obvious the learning curve required for (amateur) drag racing is as steep as a field compared to the mountain you'll have to climb in order to become any good at track driving.

Misha even puts this into perspective. Asked how long it takes to learn the track, he says it's all down to the driver. The average Joe might require over 100 laps of the 17.56 miles-long (20.83 km) track, whereas a pro driver should be ready to give their best after just ten. There really is no substitute for experience.

The car used by the two for their little outing is a modified Toyota Supra. The event was organized by Bilstein so it goes without saying what type of suspension the German/Japanese sports car used, and the list of modifications includes new brake pads and fluid, a big wing at the back for that added downforce, a new, lighter exhaust with downpipes and sports cat, an Eventuri intake system, and an engine tune that brought its output to roughly 460 hp.

That's not the most comprehensive list of improvements you can think of, but, as Misha puts it, sometimes you don't need to go over the top to get a car in top form for the Nordschleife. Take the suspensions as an example: given the sometimes sorry state of the track's asphalt – as well as the many drops and humps – make them too stiff (the setup we tend to associate with racing), and you risk ending up with an unsettled vehicle that'll be hard to control.

As Mat straps into the six-point harness of the passenger seat, he asks Misha for a guided tour of the world-famous track, somewhat naively thinking that between the avalanche of information (Misha actually knows his stuff) and the thrills of going really fast through the bends he would actually be able to remember anything.

Hearing Misha narrate the track is pretty mind-opening. It shows how many things need to be going through your mind while lapping the Nürburgring if you want to get the most out of it. Yes, they do become second nature after a certain number of laps, but that number is probably made up of three digits even for the most skilled driver.

With Misha explaining his strategy for all 154 turns of the track, Mat understandably doesn't get too many opportunities to speak. One of the questions he does manage to ask his driver for the day was what his favorite bit of the track was. You don't have to know Misha to anticipate the answer: "Everything." Yup, it's hard to argue against that. 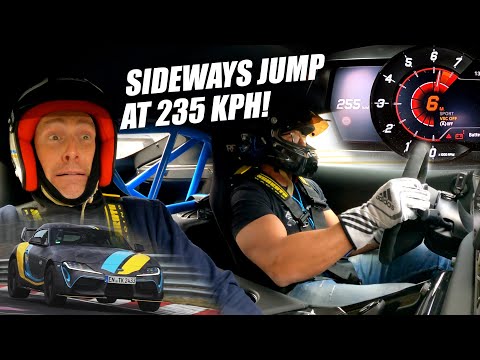