2 Dodge Viper Shelby GTS/CS Is the Only Prototype, Comes With Carroll’s Blessings

One of two Super Snakes ever made, CSX 3015 started out as a 427 Cobra Competition that was shipped to Ford of England for a promotional tour of Europe. Not long after this assignment was over, Shelby American converted this chassis to a 427 Super Snake by supercharging it.
9 photos

Carroll Shelby’s personal car has recently sold for $5 million at the Scottsdale Auction where Aaron Shelby briefly presented the slithering serpent. “It’s something he had built for himself; he had a lot of pride in this, and loved to tell stories about driving the car,” said Carroll’s grandson.

But what about the other Super Snake? What happened to it? CSX 3303 was owned by Bill Cosby, who named his 200 M.P.H. stand-up comedy album in honor of the no-nonsense roadster that scared him to death. The following owner, a gentleman named Tony Maxey, drove CSX 3303 off a cliff and into the ocean, dying a few days later from his injuries.

Both cars flex Paxton superchargers under the hood, and yes, that’s the plural form of supercharger. 800 horsepower, God knows how much torque, no safety nannies, and a weight of 2,550 pounds (1,156 kilograms) is why the Super Snake is often described as “the Cobra to end all Cobras.”

Chassis number CSX 3015 still features the original rear-end oil cooler and pumps, according to Barrett-Jackson, a date-coded 427 engine block that’s also completely original, and many other period-correct parts that include headers and side-exiting pipes. Given the condition and Carroll’s ownership, it comes as no surprise the Super Snake has sold for $5 million.

Super Snake, however, means something else in this day and age. A quick look over the configurator on Shelby.com reveals two Super Snake-branded packages: one for the Mustang and the second for the F-150 pickup. Whereas the half-ton truck makes do with 775 horsepower, the muscled-up pony car exceeds the old Super Snake’s output with 825 horsepower. 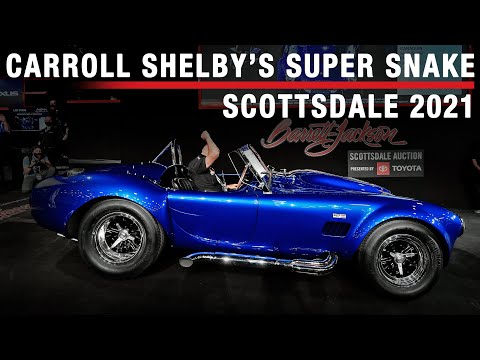