CarPlay has become a very common feature in modern cars, and lots of drivers out there actually turn to aftermarket head units to get similar capabilities in older models as well.
6 photos

On the other hand, it’s not necessarily a secret that CarPlay isn’t exactly everybody’s cup of tea, as it comes with a series of limitations (just like any other Apple product) regarding the apps that you can run in the car.

This is why many people are actually considering an upgrade to a full iPad.

Soundman Car Audio, who has already performed many similar upgrades using custom dash mods, has recently created a one-of-a-kind upgrade for the 2018 Chevy Silverado as well.

The dash has been completely modified to make room for a larger 12.9-inch iPad Pro, which can be easily put in place and removed using a quick slide gesture. The panel has been painted in a special finish to be as premium as possible, so at the end of the day, it looks almost like factory-installed equipment.

As for the benefits of having a full iPad instead of CarPlay behind the wheel, just think of the number of apps that an Apple tablet provides access to.

For example, the iPad isn’t limited in any way to what apps you can run, no matter if you’re in a car or not. Obviously, this doesn’t necessarily mean you should watch Netflix or YouTube while driving (because this is a huge no-no anyway), but on the other hand, opening these apps while parked, such as when waiting to pick up the kids from school, certainly comes in handy.

Given the custom dash mod allows for the easy removal of the iPad, you can always take the tablet home if you don’t want to leave it in the car overnight. And of course, the dash includes a charging connector to make sure you never run out of battery while driving. 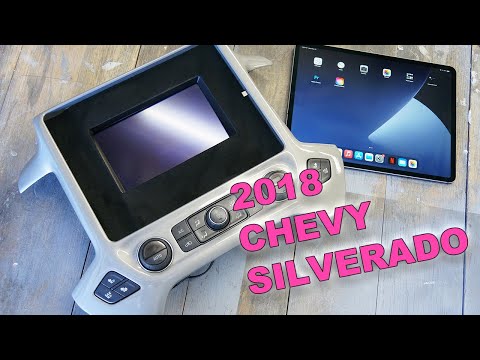