Although the reinvented L663 Land Rover Defender has been out and about for a while, there are still many fans of the original One Ten/Ninety series. And because some of the examples are now over 25 years of age, they can be legally imported to America.

United States Defender aficionados know very well there were a few thousand examples specifically produced for the market across the Atlantic – the (in)famous North American Spec series. But, otherwise, until they are old enough, other units are very hard to come by. Sure, one could travel the nation and attend trade shows and auto festivals in search of original vehicles. Or, if money is no object, there’s another – very interesting – route.

A few companies, such as Kissimmee, Florida-based E.C.D. Automotive Design has taken it upon themselves to build the dream Defender all Land Rover fans have been craving for. Complete with customer-requested specifications, of course. The folks have become renowned by restomodding the Defender (in all forms and varieties, from 90 to 130 and anything in between), but they are also good at remastering older Land Rover Series, as well as the classic Range Rover. With an electric powertrain, if the customer so pleases.

If the V8 grunt is mandatory, there’s always the route of lovingly restoring an original engine. Or, better yet, add a touch of reliability, easier to find spare parts, as well as a dash of American controversy, in the form of an LS swap. Not just any LS swap, though, but of the Corvette LS3 variety. Seriously, they can hook up the vintage Land Rover Defender off-roader with the kind of grunt that made countless iterations of “America’s sports car” such a legendary sports car.

So, performance is also on the menu. And what better way than to exemplify it with a taste of their latest build. It’s called “Project Ransom” and comes in the form of a lovely-specified (the owner has designer connections, according to E.C.D.) Defender 110 with a convertible soft top. The glossy green body shade is certainly a different take on the traditional British Green nuance and comes subtly contrasted by way of many black accents.

In keeping with the vintage looks, the new 16-inch Wolf wheels have an OEM atmosphere and were shod in there’s-no-patina-here BFG all-terrain tires. Safety is of utmost importance when it comes to old vehicles, but the Landy seen here got that covered with a four-point convertible roll cage. The creature comforts are also present, in the form of fold-down side steps and a truly mesmerizing interior.

As such, the classic front grille bodes well for the atmosphere, along with the vintage steering wheel and instrument cluster gages. The rest of the cockpit is all about modern times and a luxurious atmosphere, thanks to the Puma heated and ventilated front seats, the Apple CarPlay infotainment system (with premium JL Audio sound), USB ports, or the rear AC. Naturally, the highlight of the interior is plainly obvious – that would be the Porsche Nappa Brown leather upholstery that wraps around every seat, including the 60/40 split middle row or the two additional benches located in the cargo area.

Last but not least, there’s the LS3 elephant hidden in the engine bay. It could be entirely outrageous to fit a decidedly American powerplant (it’s hooked to a six-speed automatic transmission, of course) inside the belly of a decidedly British all-terrain vehicle. But it has worked wonders so far, at least from E.C.D.’s standpoint. They are churning out one project after another and we have counted at least three recent builds (New England Safari, Stirling, Blackcomb) that make use of the same LS3 heart.

There’s more of the same, but we cited that particular trio because they have the upgraded Corvette LS3 powerplant – the one that jumped from “just” 430 horsepower on something like the older Project Invictus to the current configuration of 565 horsepower. Now, imagine the surprise on everyone’s face when the owner comes up with a classic-looking Defender and they hear the 6.2-liter V8 grunt... as well as witness the sprinting performance! 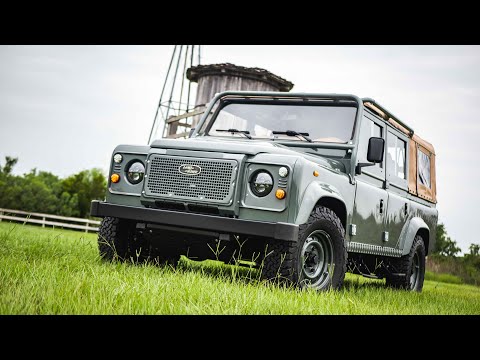