3 This 1968 Chevrolet Camaro SS Is a Movie Star, Has Been Sitting for Years

Mihnea Radu
Hoonigan began putting a Diesel 6.6-liter in this old Chevy Camaro over a year ago. Finally, it's ready and looking like a mix between a dragster, a low-rider, and a drift rocket.
8 photos

After a quick tour of their new shop and builds, we finally get to see the finished thing. The entire nose of the car is now a carbon fiber kit from Anderson Composites. The raw, attention-grabbing hood still needs to be cut to accommodate turbo piping.

A matte black wrap is used to add texture to the design, letting the carbon peak out over the fenders. We just love how they used simple graffiti to suggest where the headlights used to be.

Even though the purpose of the "Coalmaro" is to make a mess, it's been fitted with some super clean-looking polished alloys. Better keep the powerwasher on hand!

While this might trigger PTSD with environmental activists, it's actually giving us ADHD. That's because there are so many interesting stats. The Duramax apparently makes over 1000 hp and a massive 1,500 lb-ft. It also weighs about 900 lbs without the HD transmission and the turbos, so there's a lot of extra load on the front end.

The engine came out some kind of old Chevy Silverado and was sent to Pacific Performance Engineering for a rebuild. It's got a pair of precision turbos and Edelbrock high-flow headers, just to name a few of the expensive bits.

But the job wasn't over yet, as the builders also opted for modified suspension and a full roll cage, which is probably for the best when you're making so much power and torque.

There's nothing particularly special about a 5th-gen Camaro. It's the usual boxy muscle car from a decade ago, and its tech isn't that special. But it lives in the drag racing scene, where diesel swaps with insane power aren't that uncommon.

However, Hoonigan's project stands out because it's not strictly a dragster, even though it comes with a parachute attached at the back. Now, this is a shop car, an attention-grabber that's all about putting on a good show. 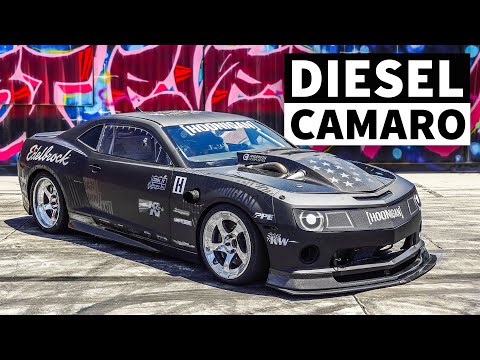