They call themselves The Mac Sisters and the Caravan Queens, and they’re Irish Travelers Lizzy and Caitlin Mac, aged 21 and 19, respectively. The Macs have risen to national fame a few years back, with the Caravan Queens reality series and their determination to “educate” non-travelers on the traveling community, in the hope that it might discourage discrimination against the latter.

Irish Travelers (who are not Gypsies, just to be clear) hail back to the 1100s, but documentation on their origins is scarce. Today, they live in trailer and mobile units on sites they consider their base, and travel around the country mostly during the summer.

The Macs are no different, except for the fact that they, unlike other members of the community, are eager to open the door to their trailer to show a glimpse of their itinerant life. And what a fab life it is!

The Mac Sisters, now proper social media stars thanks to their TikTok videos, live in their own trailer, which is an upgraded unit over the one they showed on the Caravan Queen series – and glimpsed in the YouTube video below. That one included a small kitchen, an equally small bathroom and a bedroom, and the glam room, which was where the two sisters held their designer haul and did their makeup. While it was still a comfortable home, it paled in comparison to their current trailer, which they showed off in their most recent TikTok videos.

Not only is the entire trailer decked in fuzzy rugs and suede leather – and, apparently, tiny porcelain statuettes of princesses – but it comes with its own, full-size walk-in wardrobe. Most people would be grateful for a proper restroom in a trailer, but this one has a walk-in wardrobe and a living room with a fireplace.

Lizzy and Caitlin, like most Irish Traveling girls, are obsessed with fashion and glam. They’ve spun it into a career as Instagram models and social media stars, which, in turn, has earned them a steady following that allows them to say they have working jobs as content creators.

They say their walk-in wardrobe is packed to the brim with legit designer pieces from the likes of Louis Vuitton, Chanel, Jimmy Choo, and Gucci, arranged by season and color. Is it the most elegant, stylish thing ever? Probably not, but it’s still incredibly surprising to see one on a trailer.

“Traveler girls like making a fashion statement everywhere they go, a picture is a thousand words,” Caitlin said in one of her older interviews. “That's why we have to dress the best.”

The Macs keep their trailer spotless, and they swear every other trailer of their family is the same. When you live inside a community, but also exposed to the prying eyes of everyone else, you really have no other choice but to keep your home completely spotless, they say. So, when they’re not getting dolled up for social media or attending classes in school, they’re doing chores around in the family’s trailers.

Caitlin and Lizzie are located in St Albans, England, and only travel during the summer, so they consider their trailer – and the family’s trailers – a permanent home. Either trailer could move if it had to, but it rarely does, but it still serves as a unique insight into the world of the Irish Traveling community – and a very glam one at it, by Lizzy and Caitlin’s understanding of the word. 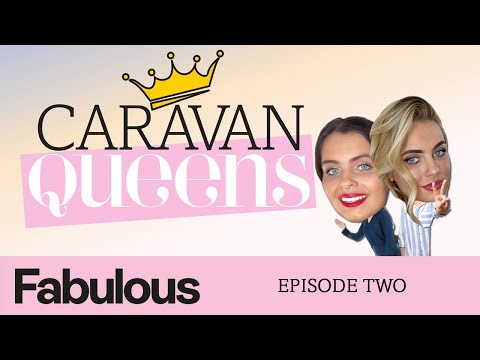