4 Zipcar Control with New iPhone App
Up Next

Daniel Patrascu
Some many years back, together with the advent of the rent-a-car concept, a new way of motoring was born. Businessmen traveling from city to city no longer had to worry about transport when they reached their destination. Soon, you no longer had to own a car to drive one, nor did you need to ask your friend for permission to use his/hers. The basis for car rental was set in 1916, when a Nebraska Ford Model T owner started renting his car to local businessmen, starting one of the most successful industries of the 20th century. Today, the car rental business is about to get enriched with the addition of a relatively new concept: car sharing. The car sharing concept itself is not all that new, as it has been used in corporate environments for some time now. Yet, the introduction of car sharing to the wider public represents the next step in, for now, city motoring. The concept operates on a very simple basis. Instead of actually owning a car or resorting to traditional rent-a-car companies, customers can benefit from a car whenever they want, from pre-established locations. Unlike traditional car rental, car sharing allows several customers to use the same car as they go about their business. How does it work To benefit from a car sharing program, a customer must at first register with the company which operates the fleet. The company does the necessary background check and then approves you as an eligible customer. Depending on where you are located and the company you go to, prices for the use of the service will vary, but usually gas and insurance are covered. Payment mostly covers an yearly or monthly subscription. Car sharing companies will issue a card for each customer, to be used when picking up a car. The pick up is done from pre-determined locations in the city. As car sharing does not require you to physically pick up the keys to the car of your choice, the card is to be used for unlocking the car. All car sharing vehicle are fitted with a card reader on the inside of the windshield, which recognizes the card and unlocks the car. As we said, car sharing means you don't pick up the keys from anywhere. Instead, they are located in the car, to be used by all those sharing the vehicle. Depending on your needs, car sharing companies give you the opportunity to choose from a variety of renting possibilities. You can choose to drive the car only on Tuesdays, in between 6 AM and 7 PM, you can rent it for a week or a week-end, or for 3 hours every single day. Options are basically unlimited, but usually the company needs to know precisely when you need the car, so the schedule of others does not interfere with yours. Some companies will make your card active only in the respective timeframe. Whatever hourly or daily plan you choose, the car must be back in a company-operated parking lot when time's up. Depending on the company you choose, you may be required to get the car back to the same lot you pick it up from, or you can leave it in another company lot. Advantages The advantages of a car sharing program in a city are obvious. Such a program can be used by those who don't own a car, as well as by those who do, but would rather not use it to go to work. The system is ideal, according to a study conducted in 2007, for those driving less than 10,000 km/year (6,200 miles). Why? Well, it costs them less to use a car sharing program than actually owning a car.
The biggest advantage we can see in car sharing is flexibility. Say you live in the US and a trip to Vancouver is just around the corner. All you have to do is reserve a slot for using a car in Vancouver on say, Wednesday, and you're set. No trip to airport-based car rental companies, no filling out papers, no keys to carry around. Just go to Vancouver, get to the lot, pass the card over the reader, drive, bring the car back...

The car sharing concept means the car is maintenance-free. For you, that is. You don't have to worry something is broken or that you missed a service appointment. All this is being that by the operator of the fleet, at no extra cost to you. Fueling and insuring the car are also is out of the question, as these aspects have been covered by the company as well.

Some say having a car sharing program in a city may help reduce congestion, as more people will use the same car, instead of each of them going to work in their own vehicles. 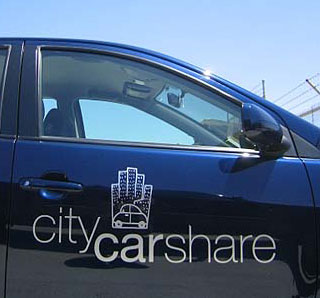 So far, car sharing has not managed to impress. Although heavily present in some parts of the world, it is completely absent in others. It becomes less cost-effective if you drive a lot, especially in a city.

Being forced to stick to a tight schedule, you may find you were better off using your city's public transport. We all know it's hard enough not to be late for work in a crowded city, let alone get a car back in its place when the time's up. Usually, penalties have to be paid if you are late in returning the car and not because the operator wants to increase its profit on your expense, but because, remember, some other person is waiting to pick up the car.

As most city residents start/end work at roughly the same hour, it is hard to see how car sharing can solve the congestion problem. No matter how complex the scheduling program, it's hard to make, for example, 1,000 people share only 100 cars.

Still, the concept has a lot of potential and it has all the chances of becoming the success story rent-a-car turned out to be in recent years. And, who knows, perhaps in time car sharing will be the only way of moving about in a city...