1 World’s Largest Tower Crane Can Lift the Equivalent of 300 Cars Over 1,300 Feet in the Air

Car Falls Off Raised Bridge, Shows Life Is Not Like Grand Theft Auto

Sebastian Toma
An automobile fell off a bridge in Leuven, Belgium, after the drawbridge was raised despite having that vehicle on it. It is unclear how the structure began its motion under the circumstances, but it happened, and the vehicle's grip did not match gravity.
8 photos

Although it may be interesting to see what happened while watching a YouTube video, things were not as relaxed for the family that was inside the car. The couple and their child went through the fright of their lives, and they were trapped inside once the car landed with its roof facing the wrong way.

As the Brussels Times notes, the three occupants were admitted into the Gasthuisberg hospital in Leuven for checks. The local police commissioner, Marc Vranckx, stated that their injuries are "not very severe." Unfortunately, it is not clear how the driver managed to get on the draw bridge after it began to lift moving elements.

One would expect these structures to have several fail-safes to prevent situations like these from happening. This incident goes to show that not everything you see in the movies happens as the stunt specialists and directors might lead you to believe. The same applies to GTA, mind you.

Local authorities in Belgium have decided to close the Marie Thumas bridge for traffic of any kind until they find the root of the issue. Structures like these should not be able to start moving while a vehicle is on them.

Instead of just feeling sorry for the couple who had the misfortune of being on a bridge that was being raised while their car was on it, you should take this video as a cautionary reminder. Be aware of your surroundings wherever you are and focus on the road ahead while proceeding on this kind of structure.

The same applies to parking structures, elevators meant for vehicles, and any structure built by humans. Just remember that things may not work as advertised or expected, and unfortunate events may happen. At the end of the day, you should do your best to stay safe wherever you are. 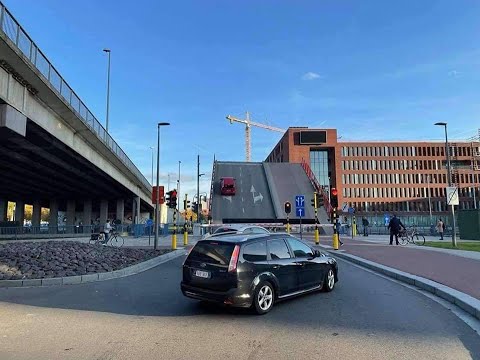