1 How the Road Ate a Toyota Camry

4 Potholes Cause Over £1m Worth of Damage Every Day

5 How to Avoid Potholes
Up Next 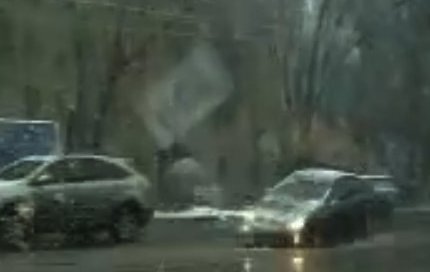 From time to time, we like to bring you news of more or less horrifying potholes, which seem to have appeared out of nowhere, chewing their way at wheels, tires, sway bars and even entire cars. Yet, none of the potholes we've shown you so far compare to this one.

We all know Russian like to build big. Apparently, the same approach to life is a defining trait for potholes as well. As you will see in the video below, the hole which appeared in a Russian road during a winter is, however, of another breed.

There are no hard edges surrounding this pothole. No sudden fall for unwary drivers and their cars. Just a smooth drop, followed by a not so smooth climb which makes the cars get airborne for a split second.

Judging by the cheerful manner in which people approach the hole, we can definitely say it wasn't there long before this cruel video was shot. Judging by the surprise most of them show after passing over it (or should we say through it), we can also say nobody guessed it was that deep.

We're not sure what became of the pothole, or the people who experienced it first hand. According to what we're able to find out, the video was shot some two years ago, in Samara, Russia.

In the past, we've all heard how Russian like to buy and from time to time drive tanks. Now we know why. Because, as someone on the web likes to say, in Russia, you don't drive over potholes. The pothole drives over you.