2 Dot Is an Old Ferry That Became a Gorgeous, Floating Palatial Home

As our cities are constantly developing and growing, so is traffic. Traveling from point A to point B is no longer the easy matter of “just” hopping into your car and taking a short drive or quickly catching a bus, so alternative solutions for mass transit are needed. Badly.

For cities and areas with large bodies of water that already allow for the use of waterborne transport, a solution would be to develop and further integrate this solution. That is where CAPTN Vaiaro comes in.

CAPTN Vaiaro is a project by the Kiel University, in partnership with the Muthesius University and local authorities, to develop tomorrow's mass transit solution. It is an autonomous, all-electric ferry that stands out for being fully integrated into the local network. It’s part of what is being described as networked, inter- and multi-modal mobility, which creates mobility chains that link all forms of public transport for the benefit and easy access of the end consumer.

In fewer words, the ferry works in conjunction with other forms of public transport, like buses. Using it would be a simple task of getting on the app, checking the bus routes that lead to the pier, and then hopping on one to cross the Kiel Fjord in Germany. The networking aspect is emphasized in the name of the project, CAPTN, which stands for Clean Autonomous Public Transport Network.

But the Vaiaro also stands out for being a striking-looking ferry, in keeping with the theme of “transport solutions of tomorrow.” Parties involved in the project have, so far, developed two concepts for the Vaiaro, both sharing the same boxy, elongated form factor, called “Floating Platform” and “Passage.” However, one is more like a gliding glass box with a dorsal fin and hydrofoils (the “Floating Platform”), while the other looks like a floating terminal covered in futuristic-looking latticework (“Passage”).

The idea is the same for both: offer easy crossing over any body of water, at all hours and on-demand. Because they’re autonomous, the ferries could operate around the clock, with the possibility of on-demand operation during less busy hours, possible in an accompanying app. Being electric, they offer waterborne transport that is emissions- and noise-free, but also several times faster than with conventional ferries, of the kind used today.

Being designed to link with other forms of public transport, these two ferries are meant to be as inclusive as possible. They’re spacious yet elegant in their minimalist style, with access for wheelchairs, bike stands, and even seats dedicated to pet owners. Passengers will have several large displays to inform them of their destination or the next stop or how much time is left in the journey.

Perhaps just as importantly, should these two ferries ever be built, they could become landmarks in and of themselves. “The new ferry will also create a new landmark for the city,” the designers say. “In the future, tourists will be told, if [you] go to Kiel, [you] definitely want to take the new ferry.”

Public transport is one of the pressing issues that need to be solved in the urban landscape. Truth be told, this isn’t the first electric ferry proposition we got in recent days: last month, Candela, a leading European builder of electric boats, presented its upcoming project, called the Candela P-30 Hydrofoil. It will be electric and will use hydrofoils for the smoothest, fastest ride. It aims to be the fastest ferry in the world when it starts commercial operations in 2023 in Stockholm, Sweden.

Much like the people behind the CAPTN project, Candela believes water transport can and should be modernized to become a better, cleaner, and more comfortable alternative to mass transit on land. 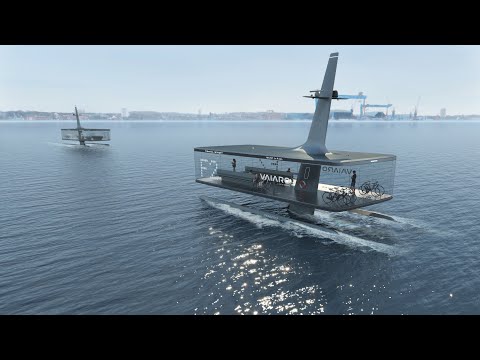