3 Carlos Ghosn Showers Elon Musk and Tesla With Praise, But Not His Former Company

4 Who Let the Moose Out? Giant Deer Stops Traffic on a Highway Just 'Cause It Can

Canadians Are Urged Not to Let Moose Lick Their Cars

Elena Gorgan
“Do not let moose lick your car” might sound like something that you’d see written on a sign in a cartoon or some type of silly comedy, but it’s a real thing in Canada.
5 photos

Every year, drivers in Canada are urged not to let or otherwise encourage moose to come lick their car. A couple of photos recently posted to Twitter with a road sign reading just that, “Do not let moose lick your car,” went viral at the end of last week. Snopes has confirmed that the photos are legit, saying the sign was posted along Maligne Lake Road in Jasper, Alberta, Canada.

According to the same media outlet, this has been a problem for some years, but it’s becoming more troublesome. Moose have a soft spot for salt, which is sprayed on the roads to keep them from freezing, and they’ve discovered that they can easily get a good mouthful of it by licking it off cars’ doors, bumpers and wheels.

“[This] started as an occasional issue a few years ago and now is too common…,” Jasper National Park spokesman Steve Young explains. “People are getting far too close, and it’s perpetuated by their [the moose’s] obsession with salt, accessing the vehicles.”

The danger in offering moose an open-buffet on salty cars is that it draws them closer to roads and, in time, makes them less cautious around man – or heavy traffic. This, in turn, increases the odds of a collision, which can be deadly for both parties involved.

As for questions on how anyone should go about changing a moose’s mind, the answer is simple: whatever you do, don’t get out of the vehicle and / or try to push the animal away. Instead, drivers are urged to honk their horns or drive away slowly.

In other words, it’s the opposite of what the couple in the video below did in 2016. 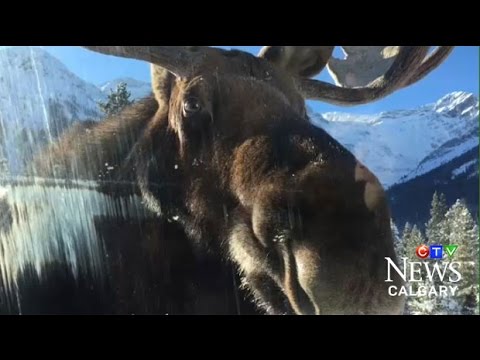 
Because cars have salt on them, and moose like salt, and if they lick cars they will not run away from cars, on the highway, as you try to not hit them, get crushed by them.