1 Lamborghini Huracan vs. BMW M2 Tug Of War Is Real, Drivers Do It Again

2 Ferrari F430 Spider Towing a Trailer Is the Practical Supercar

3 Lamborghini Urus Racing Itself Is the Most Swiss Thing Ever

Can You Tow With a Lamborghini Huracan? A YouTuber Found Out

Towing with a Lamborghini is not what most people would consider doing, especially since the Italian brand known for its exotic vehicles did not offer the possibility of installing a tow hitch. When you think of a supercar, you do not think of towing with it.
11 photos

Now, just because the manufacturer has never offered something does not mean that it cannot be done. In many cases, it can be done, but with certain compromises, and the people in charge of everything decided against them when the vehicle was developed.

Only some vehicles are meant to be towing high loads, while others have strict restrictions or even a ban. It is the driver's responsibility to be informed of what their vehicle can tow.

Remember, kids, every vehicle on the market today represents a compromise in one way or another, as there were budget caps when its development took place, it had to be sold at a certain price, and it had to do a list of things, not just what you dream of it to do, as well as what you want it to. It is that simple, sometimes.

Now, returning to the topic at hand, a YouTuber who has no fear of destroying his Lamborghini Huracán Supertrofeo Evo with a twin-turbo kit had a dream. He had previously seen images of an Urus tow a Huracán Performante Spyder, and he felt that he could do better.

Since Lamborghini never planned to let Huracán owners tow trailers with their vehicles, there is no approved trailer hitch for the Italian exotic car. Somehow, Choi had one installed, and he proceeded to test it through various methods. Mind you, he was not the first to tow another vehicle with a Lamborghini.

Do not try to replicate this video in any way. If your car was not designed for towing, don't try towing with it.

Since the Italian exotic was not supposed to be towing, there were a few other setbacks along the way, but we are not going to ruin Choi's video for you, so go ahead and see what it's like to tow using a Huracán. 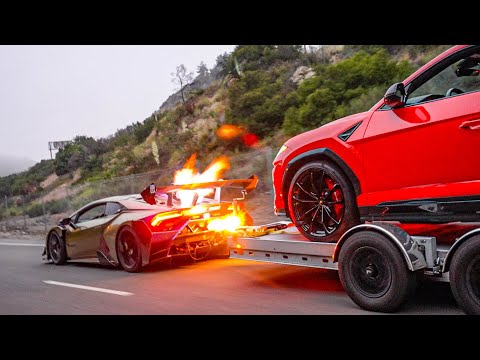