5 Lada 2101 Becomes a Coupe With the Help of BMW E46 3 Series Donor
Car video reviews:
Up Next

Can an Inline-Six Engine Be Built From Two I4s? The Russians Have an Answer

If experiments with vehicles are your thing, and you want to see things done as fast as possible, without expecting things to be perfect, we have a treat for you. It can be seen as a belated Christmas gift that was sent on time but got delayed because of the busy schedule of delivery drivers everywhere.
6 photos

We are sure you have wondered if it would be possible to build a six-cylinder engine starting from two four-cylinder units. The Russians at Garage54 have decided to answer this question with an experiment, as they have accustomed their over 640,000 YouTube subscribers in these past few years.

They have already shown us that two Lada engines can be joined together, or that one such engine can be chopped in half, lose two cylinders as a result, and still be started and used. Now, with a 2JZ seen under the hood of a third-generation Toyota Soarer in their workshop as inspiration, they have decided to see if they can build a six-cylinder motor from two four-cylinder units.

They started with two M11-series engines, which were employed on the Lada 2101. The SOHC unit had a displacement of 73.1 cui (1.198 ccs) and produced 59 horsepower in its day. The home-brewed inline six-cylinder unit that would result from joining an inline-four with half of another Lada engine comes in close to 1.8 liters of displacement.

Their video is not an attempt to obtain as much power as possible, but to see if it can be built and if it will start. As you can imagine, engines are not meant to be cut and welded together, so several challenges will arise.

The Russians at Garage54 are forced to improvise several parts of their build, which makes the entire thing even more interesting. Simply ordering parts from the internet and assembling them can be fun to watch until a certain point, but fabrication takes things to a whole new level. 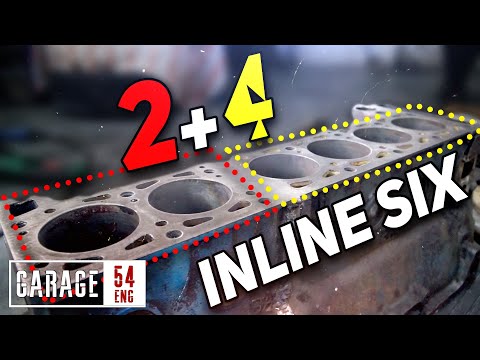