Can-Am Maverick Gets Infected with Mansory Bug, Turns Into the 225 HP Xerocole

In the world of unconventional machines, the Can-Am name is a respected one, as the North American company has been in the business of designing anything from motorcycles to ATVs for decades. Presently, one of its most prized product is the Maverick offroader.
16 photos

Offered in a variety of configurations, the Maverick is an all-terrain monster capable of developing anywhere between 120 and 195 hp. The power of the top-rated buggy is insane for a machine that weighs under a metric ton; yet it is not enough for tuning houses like Mansory.

In a bid to offer more than their usual tune-ups for British, German and Italian cars, the German garage set out to customize its own desert buggy. It chose the Can-Am Maverick for the task, and seems to have spared no expense.

Look as you might on the Can-Am website, you will not find a Maverick so extreme. Officially named the Xerocole, this variant has had most of the body panels removed and replaced by ones made in carbon fiber. You would have thought that would bring the weight down from the roughly 670 kg of the stock version even more, but the addition of normal doors instead of the ones used by Can-Am canceled the gains and made the build tip the scale at 738 kg.

Other visual changes include, aside for the Orange Desert Sunset paint on the body (also visible on the rims and suspension struts) the extension of the roof, and the fitting of headlights on the edge that formed as a result.

The added kilos should not affect the buggy’s performance, though, and that’s because the 3-cylinder engine has been tweaked into developing 30 hp more than the top of the range Maverick, bringing the total to 225 hp.

Mansory was supposed to bring this build, alongside a wealth of others, at the Geneva Motor Show. The date for the market launch and pricing was not announced. 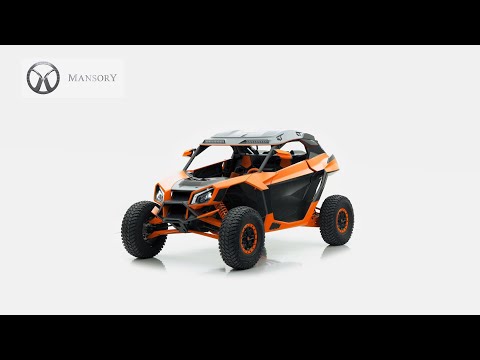