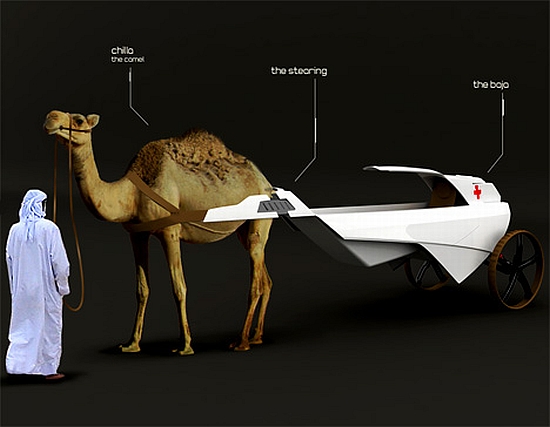 The evolution of ambulance vehicles in recent years has reached new heights. Apart from getting to a hospital in just minutes after an accident, patients can now receive almost full medical assistance on the ambulance itself. In the old days, if you were unlucky enough to be in need of an ambulance some pretty hard times awaited you.

Similar troublesome situations can still happen in remote locations, such as a desert. Apart from the rare occurrence when helicopter-help is available, if you happen to get into a serious accident while strolling around in a desert you're pretty much as good as dead, since regular ambulances aren't known to be very practical in the sand. What is, you might ask yourself. Well, apart from ATVs, enduro bikes, buggies and camels, nothing can quite establish itself as a practical desert means of transport.

Enter the Baja ambulance concept. The work of a design student who names itself Fresch, the Baja concept is a camel-trotting vehicle which was designed with the sole intention of helping sick people in the desert. Yankodesign.com informs us that the camel-powered vehicle is a very futuristic compromise, a wacky combination between a modern ambulance masterpiece and technological simplicity.

Although it might look like an geeky, shed-built vehicle for someone to park at a Star Wars convention if you're a Jabba the Hut fan, the Baja can probably provide the same level of medical assistance as Doctor Quinn. It can carry a sick person, while the same compartment can also double as a medical equipment carrier, while the paramedic/driver can also benefit from a GPS system mounted on the camel itself.

For now, the project only exists in pixel form, but with some sheik founding it might actually have a chance of going into production. Still, this camel-powered ambulance idea isn't exactly new, since it is in fact a reiteration of a so-called “camel cacolet”, which was used to carry wounded soldiers during the first World War.