3 Under Armour to Make Spacesuits for Virgin Galactic Astronauts

Calling All Aspiring Astronauts, the European Space Agency Is Hiring

Dragos Chitulescu
Do you remember growing up, being asked what you intend on becoming after completing your education? At that point in my life, my main answer would be an astronaut, although as I grew older, I started considering the idea of becoming a lawyer or a journalist. And I guess there is a high percentage of kids that have at least once dreamt of venturing out towards the stars.
9 photos

But few kids get to follow through when it comes to that dream. And I can think of several reasons why that is the case. In just a few days from now, we will be celebrating 60 years since Russian cosmonaut Yuri Alekseyevich Gagarin became the first human being to ever travel into space. Humanity is still making baby steps in this direction, and the percentage of human beings who came to be astronauts is ridiculously small.
Space. The Final Frontier
Less than 1,000 people have ever reached Earth Orbit. At present time, NASA only has less than 50 active astronauts, according to their latest website update, which happened on December 11th, 2020. We can't even begin to comprehend how large the Universe is, as it spans billions and billions of light-years across. The average distance between the Earth and the Sun is 8.317 light minutes. And the farthest we've ever been is about 0.022 light minutes.

With that in mind, you tend to realize that we are but a spec of dust in the vastness of space. And Carl Sagan puts things in perspective with his "Pale Blue Dot" excerpt: "The Earth is a very small stage in a vast cosmic arena...Our posturings, our imagined self-importance, the delusion that we have some privileged position in the Universe, are challenged by this point of pale light. Our planet is a lonely speck in the great enveloping cosmic dark"

But we have gone a long way since our early days of being nomads and just learning to carve tools out of wood, rock, and bones. The technological progress of our species is obvious, even if you look at how things evolved over the past decade or two. Just 30 years ago, who could've imagined that we would all own or use smartphones, electric cars, and the internet on such a large scale?
Courage is knowing what not to fear
And now, our attention is slowly but consistently moving towards the Cosmos. We are making baby steps still, as we're currently trying to strengthen our position in Earth's orbit while thinking about what the Moon has to offer. We are just beginning to scratch the surface in terms of exploring Mars, but yet we dare to dream about exoplanets and the possibility of life on other worlds.

We are explorers in our hearts, and as Cristopher Columbus or even the Vikings and many others before us, we long to discover new worlds. And as was the case for the settlers and explorers of the past, it is up to the astronauts, organizations, and companies dedicated to space exploration to bring light where there was darkness.

And while the likes of NASA or SpaceX are doing their part from North America, the ESA is also making a move from across the Atlantic Ocean. The European Space Agency has just recently announced that it is opening up applications for their first astronaut selection in over a decade! As it encourages all qualified candidates to come forward and pursue their childhood dreams of venturing into space, a new era for mankind begins.
Somewhere, something incredible is waiting to be known
The first-ever European Space Agency astronaut selection took place in 1977. And as of today, it has been 13 years since the last time such a process has been undertaken by the ESA. Things have been kicked off in November 2019 as ESA's Space 19+ Ministerial Council discussed Europe's ambitions and commitment in terms of space exploration.

The plans for the next few years include astronaut flights to the International Space Station, the first European astronaut flights beyond low Earth orbit, and the continued robotic exploration of Mars. Within the next ten years, ESA plans on having an astronaut step foot on the Moon, and also participating in a joint-venture, human mission to Mars. If any of you will make it so far into the process, do remember to send a selfie when you're there!

The start of this campaign has been recently promoted via a short video entitled "Your way to space", which might be enough to have you questioning all your career decisions so far. If you've ever felt that you wanted to do more for humanity, if you've ever felt that there's a higher purpose waiting for you out there, this might be it. Sure, you can't just apply for a job like this without having a proper background in terms of education.
Humanity has the stars in its future
But the European Space Agency has been considerate enough to put up a 32-page long booklet, entitled the "Astronaut Applicant Handbook" that covers pretty much everything you need to know to apply to these jobs. Only four applicants will make it into the program, and they have to be citizens from one of ESA's member states. For the first time in history, professionals with a physical disability will also be eligible to apply for the program.

Applications can be sent in until the May 28th, 2021. If you want in, you're going to need a Master's degree (or higher) and at least three years of experience in natural sciences, medicine, engineering, mathematics, or computer science. There are several phases applicants will go through, including initial screening, psychological test series, practical and psychometric testing, medical selection, two rounds of interviews, and the appointment and announcement, set for October of 2022.

Applicants over the age of 50 will not be considered for the role, unfortunately, as the ESA plans to have its crew members fly at least two missions during their contract. Among the numerous tests that you will be required to go through, there is also a swimming test, which needs to be passed during the first month of training.

As we're moving along with our Space Month special, it feels exhilarating to see what we have accomplished so far, what we are working on right now, and what our plans for the future are. In ten years from now, the world is going to be an entirely new place to live in, and as most people have pointed out, there will come a time when there will be one more address line added to our passports, and that line will read: Planet of Birth. 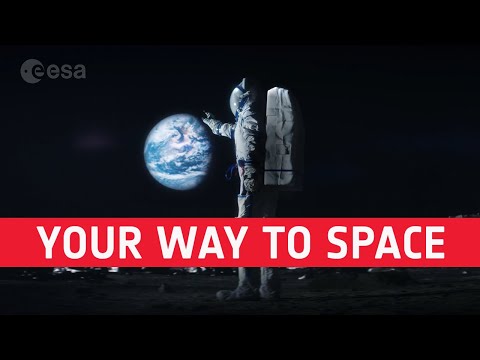