Callaway SledgeHammer: The Corvette That Reached 254.7 MPH Back in 1988

Vlad Radu
Chevrolet revealed the Z06 C8 recently, and everyone keeps calling it the best Corvette ever conceived. That might be true if we’re talking about a factory-built version, yet the best Corvette of all time remains the record-breaking SledgeHammer, a unique, street-legal beast created by Callaway more than three decades ago.
17 photos

The story of the company starts in the 1970s when a young man by the name of Reeves Callaway was pursuing the dream of becoming a professional race driver. Unfortunately, he didn’t have the financial backing to succeed, so he took a job as a driving instructor at Bob Bondurant's racing school. That was the place where Callaway met an E21 BMW 3 Series, a car that quickly grew on him.

He eventually got one for himself and took it straight to his garage in Old Lyme, Connecticut. Determined to squeeze more power out of the venerable M10 four-cylinder, he did what BMW engineers had done with the 2002 Turbo and developed a turbocharger system for it.

The tuned 320i was driven by Car and Driver journalist Don Sherman who was blown away by its performance and featured it in a one-page article. This made Callaway a household name among American BMW owners who started visiting his garage to gain some more horses for their beloved rides.

By 1977, Callaway Cars was established and, in the years that followed, the company started offering turbocharger kits for BMW, Volkswagen, Porsche, Audi, and Mercedes-Benz models. In the 1980s, the former driving instructor also developed the HH IndyCar V8 engine and later, a twin-turbo kit for the Alfa Romeo GTV6.

Around this time, Chevrolet introduced the redesigned, fourth-generation Corvette. The ZR1 would hit the streets in the following decade so, in the late-1980s, the most powerful factory-built versions of the C4 could only make a little over 240 hp.

Searching for a way to make the sports car more appealing to performance enthusiasts, GM struck a deal with Callaway in 1987, enabling those who wanted to buy a rabbit ‘Vette to order one equipped with a factory-sanctioned performance option . Called Regular Production Option (RPO) B2K, this kit added a twin-turbo system among other upgrades, giving the engine a boost of about 150 hp.

To promote the option and showcase what he could do with a GM V8, Callaway decided to build the fastest, most outrageous street-legal Corvette in the world.

Nicknamed SledgeHammer, after the long-handled striking tool designed to deliver as much blunt force as possible, the project gave birth to an incredible machine that looked much like an ordinary Corvette to the untrained eye, yet was extraordinary in every conceivable way.

Under the hood, it hid a 5.7-liter that was hand-built around a blueprinted Chevy block. It featured align-bored journals, four-bolt splay-design bearing caps, a Cosworth crankshaft, forged pistons, a dry-sump lubrication system, an MSD high-performance ignition system, and a Zytek engine management unit.

The cherry on top was, of course, a pair of Turbonetics TO4B intercooled turbochargers that provided up to 22 psi (1.51 bar) of boost. The engine exhaled through a 321-stainless-steel exhaust system with four SuperTrapp adjustable diffuser disc mufflers that stuck out from under the rear bumper.

The purpose of the project was to take the beefed-up Corvette to the track and attempt to break the speed record for a street-legal car. To do that, Callaway connected the engine to a custom Doug Nash-developed gearbox, but that unit was replaced by a ZF six-speed manual after the record attempt.

The kit also made the Corvette look much more aggressive, so in a slightly tamed form, it was offered as an appearance package for Callaway Corvettes, starting with the 1989 model year.

Inside, the car remained in its factory configuration. It had two leather-upholstered power-adjustable seats, power windows, a Delco Bose stereo, and even an automatic climate control system. The only modifications included a Callaway boost gauge, a four-point, leather-padded roll cage, a fire-suppression system, and five-point safety harnesses.

Finished in an OEM Silver Metallic (13U) paint and sitting on Dymag one-piece magnesium wheels clad in bespoke Goodyear tires, the audacious machine was taken to the 7.5-mile (12 km) oval at Transportation Research Center in East Liberty, Ohio.

Although it seems to be forgotten, especially now, with everyone talking about the Z06 C8, this amazing vehicle remains an engineering masterclass that earned its place in the history books and made Callaway famous around the world.

Initially, the company wanted to continue the program and develop even faster versions. Sadly, this never happened and with its original front fascia swapped for a stock AeroBody component, as well as standard Goodyear Eagle tires in place of the custom set, the SledgeHammer was eventually sold.

This summer, it was up for grabs through the Bring a Trailer platform, with only 2,000 miles (3,218 km) on the odometer. The highest bid reached $500,000, but the owner's reserve was not met. A month after the auction concluded, the seller reported that the iconic Corvette was eventually sold to a “respected collector for more than the owner’s reserve.”

If you want to know more about Project SledgeHammer, I highly recommend the documentary below, posted on YouTube by Callaway Cars Inc. 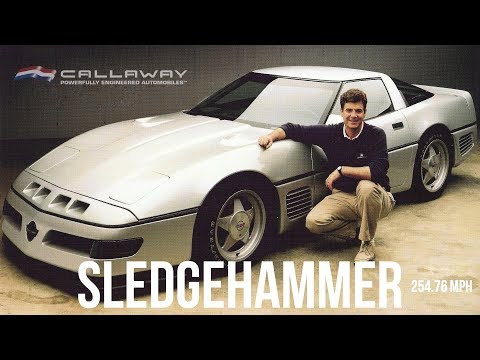